Trove Tuesday: In which the Adelaide Coffee Palace catches fire

In 1889 George Smith (William George Smith) was 25 years old, a wheat farmer at Dunmunkle  near Minyip in the Wimmera. His parents also lived at Dunmunkle and he was single, with five brothers and six sisters. 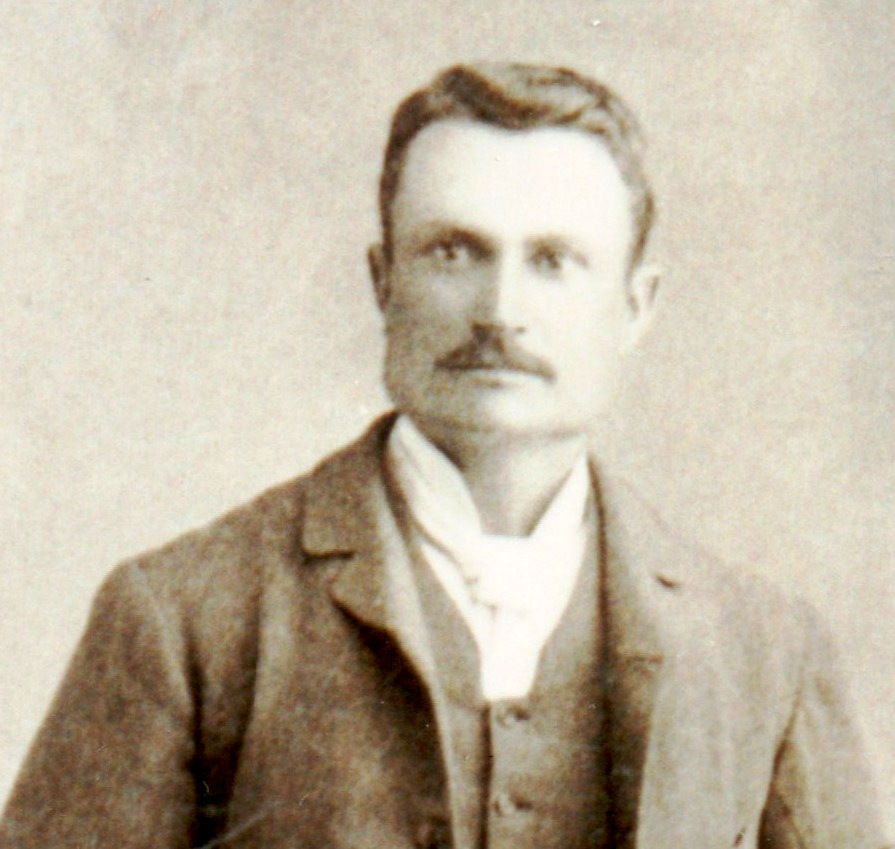 George's childhood was spent at Wangoom near Warrnambool on Victoria's coast and when he was about ten years old the family moved 250 km north to Dunmunkle. In 1889 he decided to go to Western Australia to find casual work, left home in late February and arrived back in early November. George wrote a diary while he was away but never said why he went or why he went to Western Australia. Maybe it was to earn more money, maybe it was just a bit of adventure before he settled down.

I decided to check the Trove resources against the diary entries and it has proven to be an interesting exercise. George travelled from Melbourne to Albany via Adelaide on coastal ships and then worked on the new Great Southern Railway being constructed from Albany to Beverly east of Perth. He also had time to visit a few tourist spots in the Adelaide and Perth areas.

For this Trove Tuesday blog I decided to check just one fact. George was staying in Hindley St, Adelaide and one night his sleep was disturbed when there was a fire in the Coffee Palace across the street.


22 March [1889]
Early morning three a.m. scared with the alarm of fire and found it was the Adelaide Coffee Palace all on fire square opposite my bedroom window. One of our men suffocated to death another had his back broken and is dying recovering.

The report that appeared in the paper the following day was more detailed. The cause of the fire at the Adelaide Coffee Palace was unknown but there was one fatality, Frederick W Taplin, and one badly injured lodger, Thomas King. The Adelaide Fire Brigade appeared promptly and the fire was quickly dealt with and restricted to the front of the building. 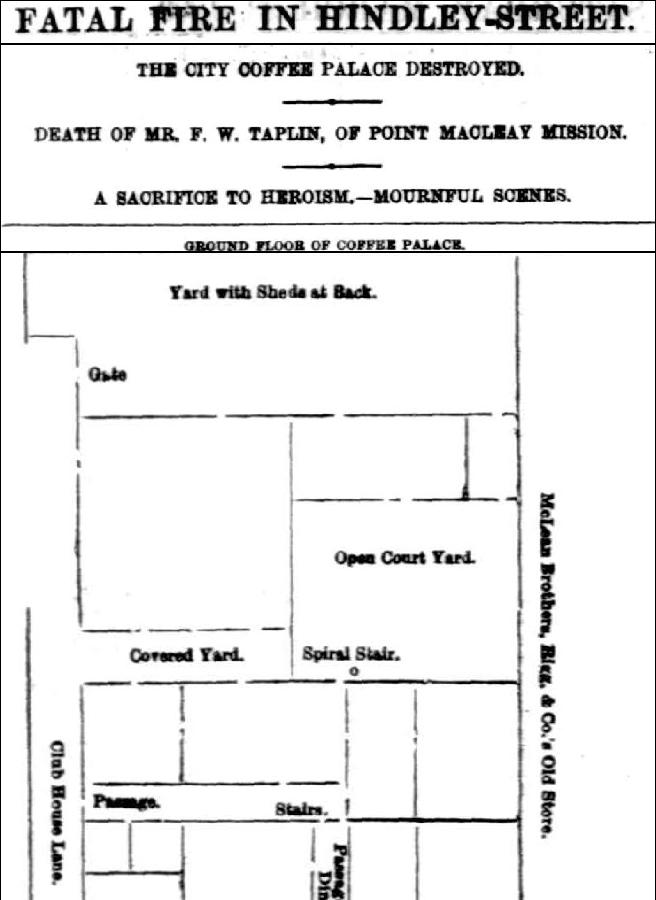 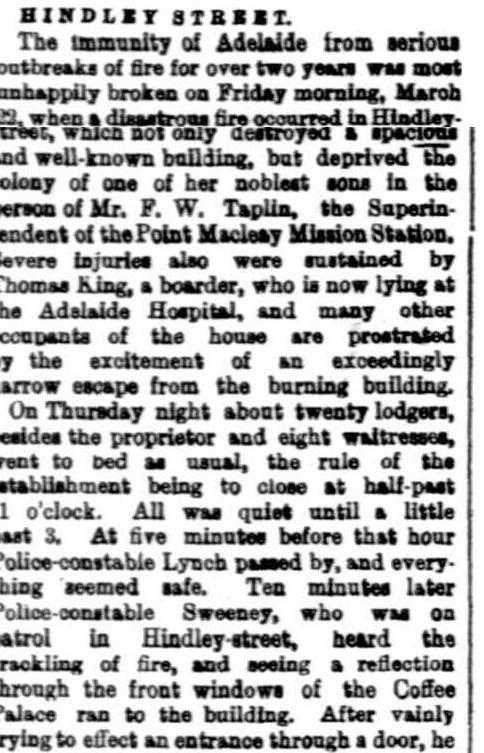 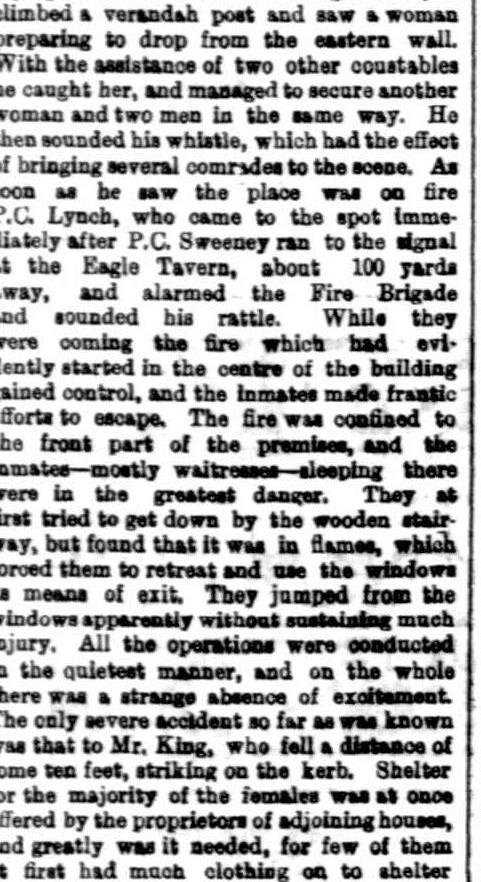 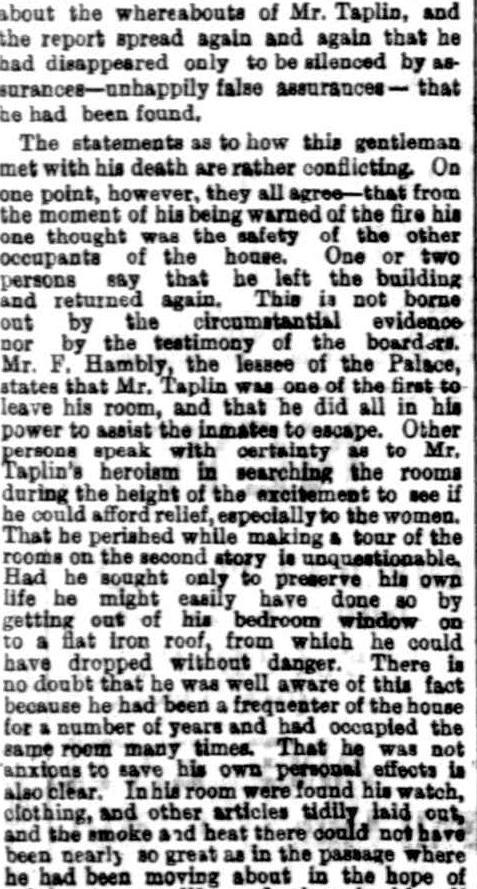 From the map included in the report above it is clear that the Adelaide Coffee Palace was located in Hindley St next to Club House Lane. The building is no longer there. Coffee Palaces originated in the temperance movements at the end of the 1800s and offered accommodation and refreshments, designed to compete with hotels.

It turns out that Frederick Taplin, the man who died in the fire, was quite well known. He was in charge of the Aboriginal mission that his father had started at Point McLeay on Lake Alexandrina on the Coorong. There was an inquest into his death and a family notice of his death published in the papers. More details (an obituary almost) about Mr Taplin can be found at Trove in the South Australian Register 23 March 1889.

There was a report of the fire published in a Western Australian newspaper. It provides a few more details.

In May there was an auction of the furniture and effects of the Adelaide Coffee House.
Great-grandfather George left Adelaide a few days later and sailed to Albany. That's a story for another day.
Posted by Boobook at 10:54 PM