Voyage to Australia: The ship 'Dirigo'

My husband's ancestor, Jane Phelan nee Welsh, travelled to Australia on the ship Dirigo  in 1859 to join her husband, Daniel Phelan. I have no proof but, according to information on their son's birth certificate, Daniel and Jane had married in Ireland about a month before he migrated to Australia. He arrived in Melbourne, Victoria in December 1856 on Royal Charter and was employed immediately as a warder in the prison. (I'll blog about Daniel and Jane another day - he worked always as a warder at Pentridge Prison in Coburg and the family lived nearby.) I don't know why Jane didn't travel to Australia with Daniel, and probably never will know. Maybe Daniel had already booked his passage, or his employment was pre-arranged and he had to earn enough to pay for Jane's passage. In 1856 Daniel was 26 years old and Jane was 18.

Great-aunt Ina told me that Jane's ship was 'shipwrecked' on the voyage to Australia and the Nominal List of passengers seemed to support that. The Dirigo left Liverpool on 28th November 1858 and Milford Haven on 4th January 1859 and arrived in Melbourne 28th March 1859. What happened between Liverpool and Milford Haven (which is on the south coast of Wales)?

So, it appears that shortly after the ship departed from Liverpool it was hit by a severe storm and was badly damaged. The top-masts were lost. The report in the Sydney Morning Herald provides more detail - 'the jib-boom, fore and main topmasts, foreyard and mizen top gallant mast' were lost. I have no idea what they are but it sounds bad. It must have been a terrifying storm for the passengers and Captain White did well to get them and his damaged ship into a safe haven.

The Melbourne newspaper, The Argus, also published a report in its Shipping Intelligence column. First I found the notice of arrival.
But then I remembered that I'd been told to always check the Shipping Intelligence column thoroughly so I scanned further down and found this report of goods imported on the Dirigo (the importers must have been getting very impatient because of the five or six week delay)...
... and then even further down the column I found this report that provided me with more details about the storm. It states that the ship was 'off the south coast of Ireland' when she encountered a heavy gale and was 'obliged to put back to Milford Haven'.

I wonder if the passengers were allowed ashore for the month they were in Milford Haven for repairs. I wonder where the new timber for the masts was sourced. Did the ship's crew do the repairs? From the newspaper notice above it appears that they had some 'considerable trouble' obtaining new masts.

So now we know that once they were under sail they made good progress until they rounded the Cape of Good Hope but then the winds were light and they slowed down. The length of the voyage was 120 days but that includes the time in Milford Haven.

Several newspaper articles also mention that the 2nd Officer, Henry Doyle, fell overboard from the poop and could not be rescued because the ship at the time was 'under double-reefed topsails'. 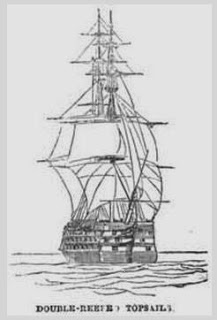 There is one more newspaper item relevant to this voyage of the Dirigo. It's an advertisement about the hiring of the immigrants. According to the disposal list on the ship's Nominal Roll our Jane was hired by J W Mansfield who lived in Swanston St, Melbourne but the date is 31 March, a day before the event detailed below, so maybe there were other arrangements as well. And I'm further confused by the fact that Jane was not a single woman, she was married to Daniel who would have been expecting her, so I'm not sure why she sought employment. Oh well, more mysteries to think about.