Oh my goodness. It's the last day of November already. Sepia Saturday just snuck in with a theme photo for Movember, growing facial hair to raise awareness of mens health. He's sporting a fabulous moustache (or is it mustache or pair of moustaches?).

My grandad, Allan Wyllie never shaved off his moustache. I think he must have grown it from when he first had to shave because it's in every photo I have of him. He never used an electric shaver either. I lived with my grandparents for a year in 1965 and I remember him sharpening his razor on a leather strop he kept hanging on a cupboard with the mirror next to it, and lathering up. He was born in 1886 and died 1966 and was a farmer in Victoria.

Now that I see all of the photos together I notice that Grandad looks very serious. He never was a man who smiled readily and openly, and his son, my dad, says that he was more likely to criticise than to praise. But I liked him.

And just for fun. This is a photo I found at a boot sale. I've no idea who it is or where it was taken but I like it very much. 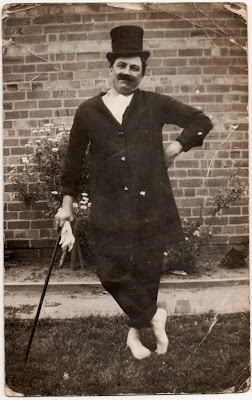