The Sepia Saturday theme photo, the assassination of Archduke Franz Ferdinand in Sarajevo in 28 June 1914, and the call to find an association between an important date in history and our own family.

Today is an anniversary for the state I live in, the state of Victoria in Australia. On this date in 1855 the 'Act to establish a constitution in and for the Colony of Victoria' was formally proclaimed. It had been drafted in Victoria and sent to the British Parliament for formal approval. It followed the 1 July 1851 declaration of Victoria as a colony independent of New South Wales. (Since the first permanent European settlement in 1834 it had been called Port Philip District.) In 1901 the colony became a state when the six separate colonies in Australia became the Commonwealth of Australia.

As an aside, I had a look for our state's Coat of Arms (not granted until half a century later). I've never noticed before, but there's a kangaroo holding the royal crown for some reason and appears to be standing in a top hat! At least our state's emblems make more sense - Common Heath Epacris impressa (floral), Weedy Sea Dragon Phyllopteryx taeniolatus (marine) and Helmeted Honeyeater Lichenostomus melanops and Leadbeater's Possum Gymnobelideus leadbeateri (fauna). 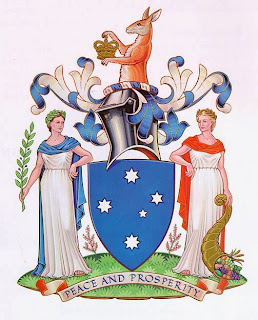 So I got to thinking. Which of my ancestors were living in the state when it was declared an independent state? Only four. John Brown and Maryanne Howe who were both Irish and migrated separately in the 1840s and married in Melbourne in March 1850. And William Chaundy, who was sent out here in 1849 by the English courts, and his wife Rachel who was sponsored to join him out here by her parish.

By the time Victoria's constitution was approved on 23 November 1855 almost all my ancestral families were out here. William and Ann Wyllie arrived in 1853, William and Mary Ann Cook arrived in 1852, James Taylor arrived 1853, Ephraim and Elizabeth Smith arrived 1852, John Hillgrove arrived in 1852 and so did his future wife, Janet Blair. The only one of my ancestors who wasn't here by 1855 was Gabriel Duckett who didn't arrive until 1868. And my husband's family follow the same pattern.

So what happened in the early 1850s to prompt all this immigration? Gold. Gold was discovered in the state about a fortnight after it was declared independent. It was the catalyst for a huge influx of people. The population increased from 77,000 to 540,000 in ten years.

In 2012 a fifth emblem was added to the state of Victoria's list. Gold became the state's mineral.