James and William Alford were brothers and they migrated together in February 1855 from Devonshire in England to South Australia. They were agricultural labourers in Devon and must have learned how to plough properly because both of them were very successful in ploughing competitions in South Australia and Victoria.

In the newspapers at Trove I've found quite a few articles detailing their successes and also those of William's sons, Thomas and George. Here's a taste.

James was living near Encounter Bay in South Australia when he entered this ploughing competition with a horse-drawn wheeled plough (similar to above) and took out first prize. 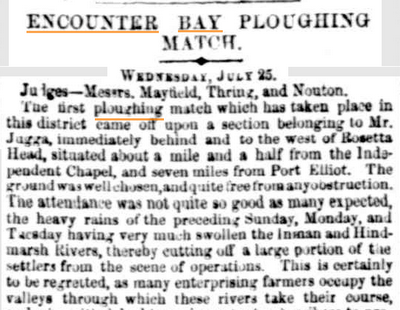 ...
The Fountain Inn mentioned above still exists. It's now a B&B called 'Yelki by the Sea'. James left South Australia and moved to Victoria. He also appears to have left farming and I can't find any other references to him as a ploughman. But his brother William was a farmer in Victoria and entered quite a few ploughing matches (Bendigo, Baringhup, Marong, Warragul, Buln Buln) as a competitor and was later a judge. Ploughing matches were very popular events in the 1800s.

﻿
The Lennon plough used by Alford was made by Hugh Lennon's company in Melbourne. His single and double furrow ploughs were hugely popular and William Alford seems to have also liked them very much. [Ned Kelly also used one of his ploughs to make his metal armour.]