Voyage to Australia: The ship 'Rodney'

My husband's ancestors, William and Ann Alford (with their infant son William), and William's brother, James, journeyed from their homes in Devon to South Australia in 1855 on the ship called 'Rodney'.

Australian newspapers regularly reported news of ships departing England but as the news was gleaned from newspapers on ships that had recently arrived it was often months out of date and inaccurate. Relatives and friends waited anxiously in Australia for news of ship travel times and events - there would have been letters sent beforehand as the intending emigrants made travel preparations.

The Rodney left Plymouth 21 November 1854 and arrived Adelaide 20 February 1855. It carried 321 passengers. William Frazer (or Fraser) was the Master, John Brownfield the Surgeon-Superintendent and Mrs Morgan the Matron. According to a report in the Government Gazette 'the ship arrived in very good order-harmony and contentment prevailed on board.'

An Adelaide newspaper listed the passengers (our William and Ann are first on the list). It doesn't mention that there were six births during the voyage and seven deaths (all infants) but the numbers were published elsewhere in the paper the same day, and the names were published in the Government Gazette. 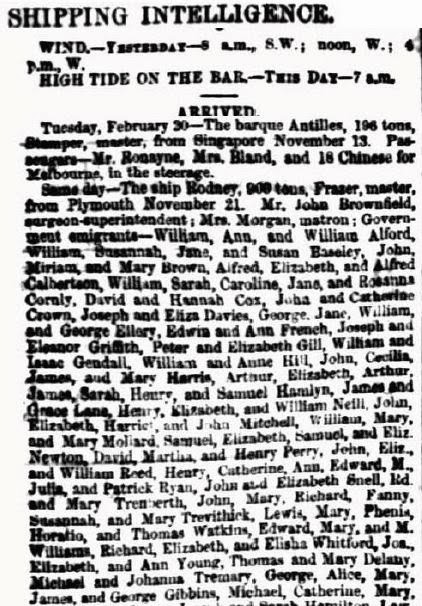 The Rodney was at Port Adelaide for about four weeks and during that time one of the crew, Daniel Small, was charged by the ship's master, William Frazer, and fined for being drunk and disorderly.
The ship sailed 20 March 1855 for Ceylon (Sri Lanka) and was carrying mail for England.
The Alfords lived near the present-day Victor Harbor in South Australia for a year or two and then moved to, initially, Brighton in Victoria. William and Ann are buried at Warragul, Victoria and James is buried at Ballan, Victoria.
Posted by Boobook at 6:09 PM