It was Liverpool 1 October 1856. The passengers and crew were aboard including Daniel Phelan who had travelled across the Irish Sea from Ireland to join the Royal Charter as a passenger for Australia.

The crew were raising the anchor when a bad incident occurred resulting in severe injuries to some of the crew. The newspaper article doesn't state whether replacements were employed at the last moment (and you have to wonder about the fate of the injured men because there was no sick pay or worker compensation) but the ship left Liverpool and sailed down the Mersey the next day.

FATAL ACCIDENT ON BOARD THE ROYAL CHARTER.On the night of October 1st, as the crew, assisted by some of the riggers, were engaged in raising the anchor of the Royal Charter steamship, about to proceed to Australia, a sad and fatal accident occurred. From some cause or other the check had been taken out of the ratch of the patent capstan, and the weight of the anchor being suddenly brought into action, caused such a recoil as to throw the capstan bars about in a terrific manner. Four men were struck overboard, two of whom were soon picked up. Six others were very severely injured, one, it is feared, fatally. The sufferers were landed as speedily as possible, and they were immediately conveyed to the Northern Hospital. One of these, a laborer named John Gunn, who resided in a Court off Bond street, was found to have had his jaw broken, and also a compound fracture of the skull. He was in a most perilous state when taken to the hospital and was not expected to survive tho night. Another named Edward Atkins, a seaman on board the Royal Charter, who resided in Myle street, Toxteth Park, had his nasal bones broken, and received a very severe contusion of the leg. John Crossley, also a seaman, residing in Newhall street, received very severe contusions on the back and shoulder. He, like those previously named, remains in the hospital. The other three, named Thomas Ryan, Richard Butler, and James Kelly, labourers, were seriously hurt, the last named having his arm broken, after their injuries were attended to, by their own desire they were conveyed home. [Bendigo Advertiser 10 Dec 1856]

... The importance of the screw as regards the health of the passengers was very apparent when passing through the calms to the north of the equator. With upwards of six hundred people crowded, as they necessarily must be, within the limits of a single vessel–carrying a large cargo besides–we should have been in great danger of epidemic disease had we been detained long in these hot and unhealthy latitudes. As it was, only slight symptoms of illness had time to manifest themselves among the children, of whom there were upwards of sixty on board. Two of very delicate constitution died during the hot weather, and one at a later period, of disease caught at the same time. The three were all very young. ...

the first land we distinctly saw was a rock called Gough's Island, rising precipitously in the midst the South Atlantic to the height of 4000 feet, in 40 degrees 19 minutes south, 9 degrees 41 minutes west; we sighted this at the very hour that had been predicted to myself the day before by the captain. And last night, when the loam of the Australian land began to appear, and above all, when the beautiful light on Cape Otway first disclosed itself at the very time we had been led to expect it, a thrill of emotion passed through all on board, caused not more by the thought of having at length got within sight of our destination, than by admiration for the triumph of science and art, which had so strikingly signalised itself by our arrival at the given hour and place after a voyage of 13,000 miles through the trackless ocean....

... the captain has very kindly supplied me with an abstract from the official records of the voyage, and which will afford me the means of verifying my statements, or correcting any errors which through inadvertence I may have committed in the calculation. The barometer, thermometer, hydrometer, and hygrometer, used on board are all standard instruments, and have been supplied from Kew Observatory, for the purpose of carrying forward the combined system of meteorological and hydrographical observation in which the leading naval powers of Europe and America are now engaged...

If you want to read his full report you'll find it at Trove's digitised copy of The Sydney Morning Herald, 16 Dec 1856. [Am I allowed to say the Rev. Lillie's sermons may have been a little dry? I could be wrong and I apologise in advance to any of his descendants reading this.]

The ship arrived at Hobsons Bay, Melbourne on 8 December 1856. 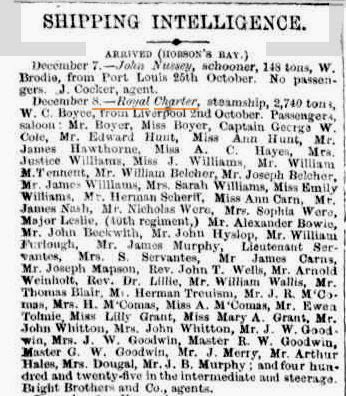 Three years and several voyages later the Royal Charter was returning to England with goods in its hold including a lot of gold bullion, and passengers carrying gold they'd mined on the Victorian goldfields. The ship was within cooee of home, just off the coast of Wales, when it was struck by a very bad storm (now known as the Royal Charter Gale) and shipwrecked. There are lots of webpages about the wreck (including a Wikipedia entry) because about 450 people died and only 39 people survived. (It is said that a number of people drowned because they were carrying their gold rather than leaving it on the ship.) Charles Dickens wrote about it in The Uncommercial Traveller, it was featured in an episode of Who Do You Think You Are because Monty Don's ancestor was one of the passengers who died, and the Meteorological Office started to issue gale warnings as a result of the shipwreck. There is even a song written about it called 'Isaac Lewis' (you can see it on YouTube).
Posted by Boobook at 11:39 PM