Foster and Honeyman family in Tasmania

The ship Triton arrived at Hobart, Tasmania on 20 Jan 1824, having left Leith, Scotland on 7 September 1823 and called at Teneriffe (the Canary Islands) and the Cape of Good Hope. On board were eight Black Angus cattle, six heifers and two bulls, imported by Captain Patrick Wood and in the charge of James Foster who was 25 years old. They were the first Angus cattle in Australia and there a plaque to commemorate the event has been placed in Bothwell by the Angus Society of Australia. 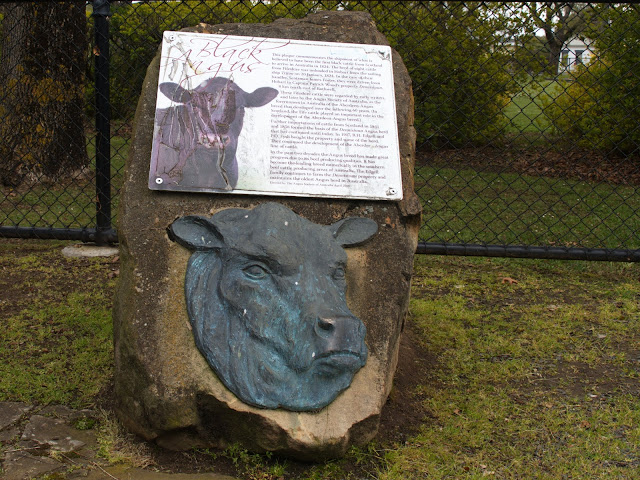 The total number of people on board, including crew, was 80. James Augustus Robinson, later appointed Protector of Aborigines, was a passenger on the Triton and he wrote a comprehensive diary of the voyage. The following quote is from an article written about the voyage of the Triton based on Robinson’s diary:

Probably due to prevailing winds the course was set northwards up the east coast of Scotland, with easy sailing until they reached Pentland Firth on the north-eastern tip of Scotland. Here William Hutton and his shipmates experienced their first battering from gales and heavy seas which lasted a fortnight, including a storm off the Hebrides. Confined below deck the steerage passengers could not even find shelter in their bunks…Heading south, the Triton cleared the west coast of Ireland and with fairer weather set course for Tenerife. The better weather allowed divine service to be held for the first time at 10.30am on Sunday 28 September…Approaching Tenerife the Triton was shadowed for most of the day by what was thought to be a pirate vessel, and they subsequently learned that it belonged to Spanish insurgents who had captured a French ship the day before. The visit to Tenerife disappointed the passengers who found that the Triton did not had quarantine clearance, and on the way had exchanged letters with the Snipe that had come from the fever port of Honduras. In consequence they could not go ashore, though they could admire the pink, blue and white buildings of Santa Cruz, and they were able to buy personal provisions while the ship lay at anchor, albeit at prices that exploited their inability to bargain in the town. Victualled with fresh provisions, including some sheep brought on board for fresh meat, the Triton left Tenerife after two days on Sunday 12 October. The episode involving pirates and known dangers of the region caused Captain Crear to issue arms to the passengers… At last on 5 December, after 12 weeks at sea, the Triton anchored in Table Bay at Cape Town and the next day the passengers were allowed ashore and some of them took the opportunity to sleep for a night or two in lodgings… From Cape Town the prevailing south-easterlies sped the ship towards Van Diemen’s Land at up to 200 nautical miles in 24 hours. The consequence was an increased frequency of storms, during which the ship suffered damage such as torn sails and broken fittings. There were compensations – on one day of fair weather two sperm whales came close enough to the Triton to provide a diversion for the passengers, and on December 22 there was fresh meat from the slaughter of a bullock that had been taken on board at Cape Town.

There was also an anecdote about the shenanigans that occurred when the ship crossed the Equator. Many of the 'victims' had their faces smeared with cow dung so it is tempting to think that the source of the dung was the Angus cattle in the care of James Foster.

James Foster was born 27 Dec 1799 in Auchtertool, Fife, Scotland and baptised a year later, 7 Dec 1800, in Aberdour, Fife, Scotland. His parents were John Foster and Johanna Smith and James had seven brothers, one of whom, George, migrated to Wisconsin, USA.

Captain Patrick Wood had a large property called Dennistoun eight kilometres north of Bothwell, Tasmania and it appears that James Foster remained in his employment after he drove the cattle up to Dennistoun from the wharf at Hobart in the summer of January 1824. The distance was about 70 kms and it is interesting to speculate on how it was done because there would have just been a track through bush at that stage and James Foster was not familiar with Australian conditions. Some of the descendants of those cattle still graze the paddocks of ‘Dennistoun’. The original homestead was destroyed by fire in 1909.


In a letter of 29 December 1825 to the local government, Captain Patrick Wood, of Dennistoun, River Clyde, asked that small grants of land should be made to three servants of his, one of whom was James FOSTER.
James Foster, one of my servants, nearly two years ago brought out eight cattle and on my speaking to Colonel Sorell (the then Governor) for a grant of 200 acres for him; he replied that he would comply with my request as he considered it right to reward a man of good character who brought out stock safe... the character I gave Foster on his arrival was on the authority of others particularly that of Captain Crear of the 'Triton', and his behaviour since has been such as fully to warrant my recommendation. In 1825 James Foster was granted 200 acres at Clyde.

James Foster's land was at Green Ponds (Dysart). He called his property 'Woodville' but by 1842 it was called 'Mimosa Banks'.

Margaret had arrived on the ship Castle Forbes 1 Mar 1822 as one of 33 steerage passengers in the entourage of Alexander Reid, a free settler, and his family. Margaret, aged 11, was travelling with her mother Jean, her sister Anne aged 10 and two brothers, Alexander aged 7 and William aged 5.

Also on board the Castle Forbes was the above-mentioned Captain Patrick Wood of ‘Dennistoun’ (a retired officer of the East Indian Army), as well as other middle-class Scottish settlers including Myles Patterson and his family, Phillip Russell, Adam Smith, Captain and Mrs Sockett, William Kinghorne (landowner and whaling station proprietor). The ship’s surgeon was Robert Officer who later became the Speaker of the Assembly. He married one of the daughters of Myles Patterson and Patrick Wood married another. Castle Forbes was 106'7" (33 metres) long, 31' (9.4 metres) wide and 14' (4.3 metres) deep. She weighed 443 tons. The ship left Leith harbour, near Edinburgh, 27 Aug 1821 and arrived 1 Mar 1822 having called in to the ports of Cape Verde Islands and Cape Town. There were 76 passengers including the 33 unnamed steerage passengers as well as crew and cargo. It appears that Margaret Honeyman and her younger sister Anne Honeyman left the ship at Hobert in the service of the Reid family while their mother and two younger brothers went on to Sydney.

The Reids were a family of free settlers and lived in Hobart for a short time until he was granted land on the Clyde River (now Rothwell). Their property was called ‘Ratho’. The family lived in a mud cottage for three years until a more permanent homestead was built. Family hearsay is that Margaret was employed as nursemaid to the family and it must be assumed that Jean Honeyman left both her daughters with the Reids while she went to Sydney to locate William, her husband. He had been convicted of theft on Scotland and sent to Sydney on the Sir William Bensley arriving 10 Mar 1817. William Honeyman died 16 Aug 1821, before his family arrived in Sydney. Alexander Reid established a golf course on ‘Ratho’ in 1837 and it is the oldest in the southern Hemisphere. Golf can still be played there today. 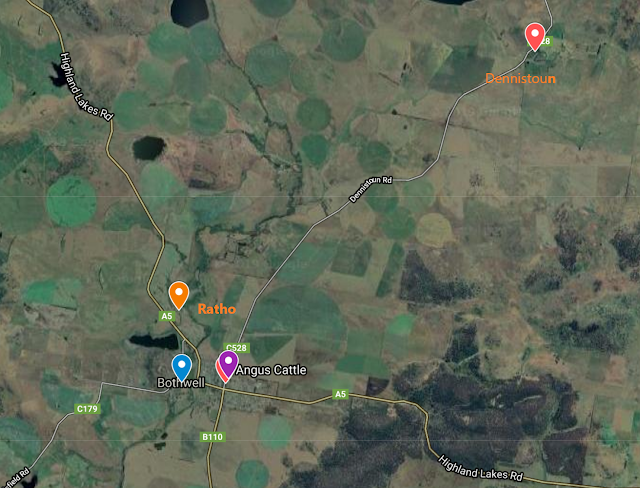 Margaret Honeyman could not sign her name when she married, indicating that she was illiterate. Her younger sister Anne, aged 16, also married in St Davids Church, Hobart. She married Campbell Roy in May 1828. Campbell Roy, who was born in Glasgow, Scotland, was convicted of theft 1823 and transported to Tasmania in 1825 when he was 17 years old. He was assigned to Patrick Wood of ‘Dennistoun’, Bothwell.

The reason for Anne's marriage soon became apparent as she died barely seven months later while giving birth to her son, Timothy, who was later admitted to the Queen's Orphan School in Hobart. She is buried in the private graveyard on the lovely 'Dennistoun Estate', with Captain Wood's own wife, Jane, and another mother, Mary Daniell, and her twin babies, killed by natives at The Den Hill. Anne Roy has a well-preserved gravestone, but no other record of the death has been found. It reads: Here lies Anne wife of Campbell Roy, who died November 2nd 1828, aged 17 years.

The loss of her sister must have been traumatic for Margaret who had herself given birth to a daughter the previous year. Margaret now had no family in Tasmania as her mother and brothers were in New South Wales. Both Margaret and Anne were pregnant when they married.

Margaret and James Foster lived at ‘Mimosa Bank’ and 'The Basin' near Dysart and had a family of 13 children, six girls and seven boys (including three sons died as infants). James was 83 when he died in 1882 and Margaret died in 1884 aged 73. Two of their daughters, Margaret and Chistianna, married into Stone family who lived nearby. They all moved to the Woodstock area of Victoria. The other siblings remained in Tasmania. 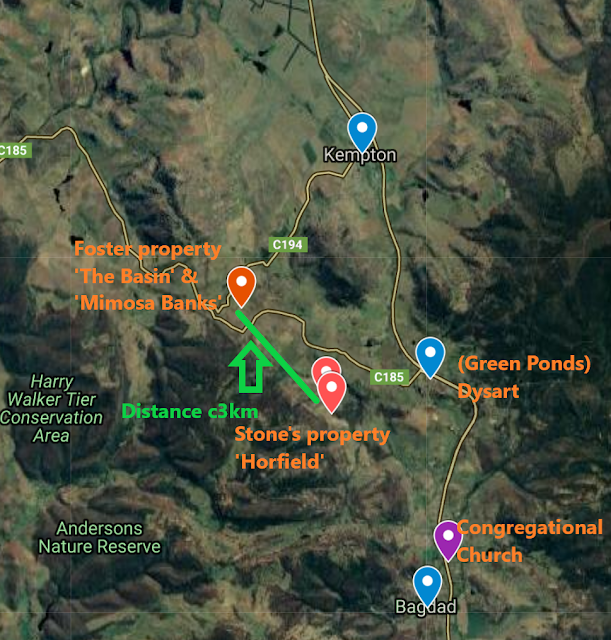 When he died in 1882 James Foster left property to four of his sons: 'Mimosa Bank', 160 acres in Parish of Huntingdon, 'The Basin' 160 acres in Parish of Huntingdon and 780 acres at Old Beach. Thomas Stone, father-in-law of Margaret and Chistianna, was one of the executors of his estate. The death notice stated that James Foster ‘ was greatly respected by all who knew him’. Margaret Foster nee Honeyman died in 1884.