A twig on the Alford tree

It's taken a while, over 30 years, but I finally got around to having another go at finding a twig on the Alford tree. I first started looking for William James Alford in the pre-computer days and failed but when I checked this week I found him quite quickly. I thought he was a twig but it turns out it was a branch.

William's father, James Alford, had migrated to South Australia with his brother and sister-in-law, William and Ann. They came from a town in north Devon called South Molton and travelled to Australia on the ship 'Rodney' arriving in February 1855. Within the next twelve months William and Ann moved to Brighton in Victoria but James stayed a little longer. He had met Honora Fallon, from Sligo in Ireland, who had arrived in South Australia the previous year. They married at Encounter Bay near Victor Harbor, 26 October 1855. We don't know what work James did at that time but he had worked as an agricultural labourer in Devon so maybe he did the same type of work.

Their first child, William James, was born 26 Jul 1856 at McLaren Vale and in December of that year the family moved over to Brighton, Victoria and lived with William and Ann until their house was built next door. James worked at making bricks.

James wrote a letter home to his father, Jacob, in South Molton and mentions his son:


I write you these few lines hoping [hoping] they will find you and your family in as good health as we remain at present thank God.
My dear father we received your kind letter and sent you the answer of it 7 months ago. We wish to write to you agin [again] to inform you that we left Adelaide and came to Melbourne. We have been here 3 months. We are living at present with Wm [William]. We bought a peace [piece] of land from William Wise 7 lbs [£] and we are going to build a home on it next week. I am working with Mr Thomas Dewson since I came to Melbourne at making bricks. My wages is 3 lbs [£] per week the living is very reasonable flour is 12 … beef and mutton from 3 to 4 per lb, butter 3 per lb eggs 3s per dozen, tea 2s per lb, cheese from 1 to 2 s per lb.
Houses and land are very dear hear [here] also clothing and boots and shoes, so is furniture
Dear father you said in your last letter that sister Mary and Richard was coming out here. I should like to know whether they are coming or no. Give our kind love to Ann and Mary, there [their] husbands and all the children. William and Ann also the 2 children send there [their] kind love to you all. William James is growing a fine little boy. He is now 20 months old and he can walk all round the room by the chairs and call his dada...

And that was the last we knew of William James. The Alford family grew, James had a store at Brighton until at least 1871 and then they moved to land at Parwan near Bacchus Marsh in Victoria. Later they ran a store at Maddingly, Bacchus Marsh. James' wife, Honora, died in 1880 and James married again in 1882 and  some more children were born.

William James must have been with his father in the Bacchus Marsh area because this notice appeared in the paper in 1899, inserted by his sister Mary Ann who was six years younger and his nearest (in age) surviving sibling.


So I searched the New Zealand newspapers online at Papers Past and found quite a few newspaper notices following his death. It seems that William James Alford had died at the Wellington Hospital because he had cancer of the liver. His occupation was a Sergeant Bombardier in the Permanent Artillery and must have been well respected by others in the Artillery and he must have been a member of several Lodges. 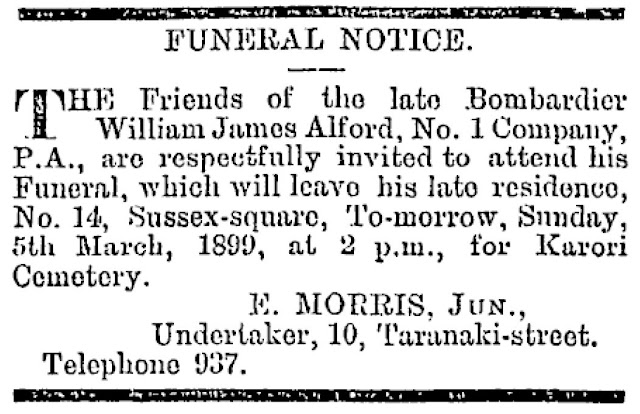 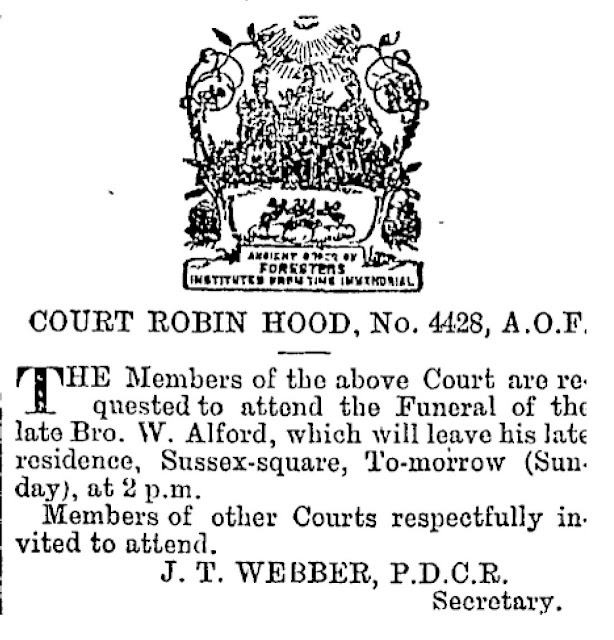 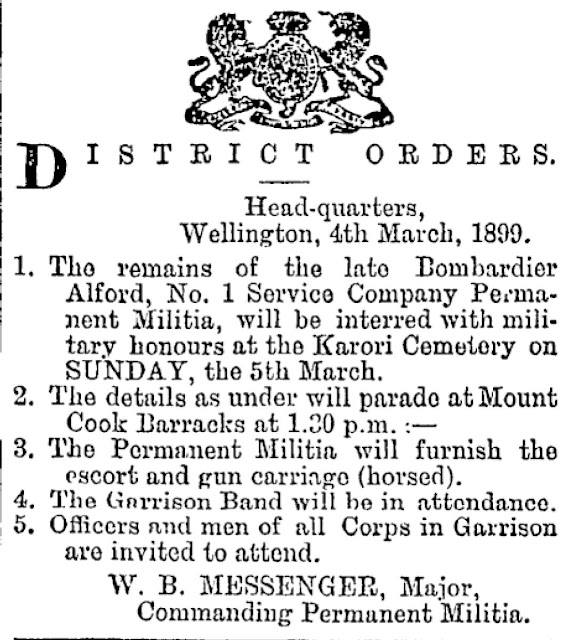 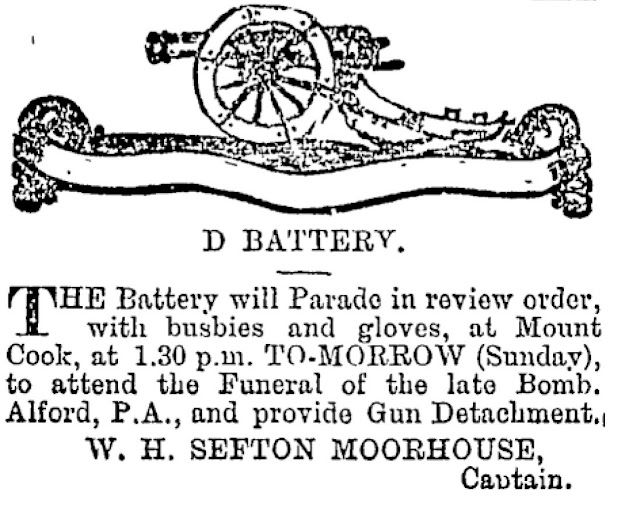 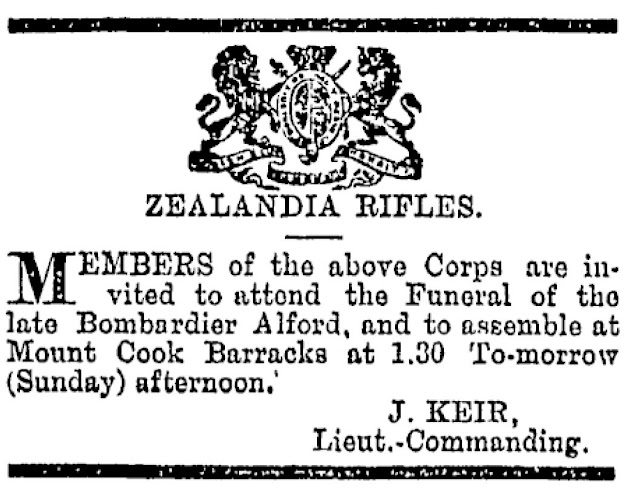 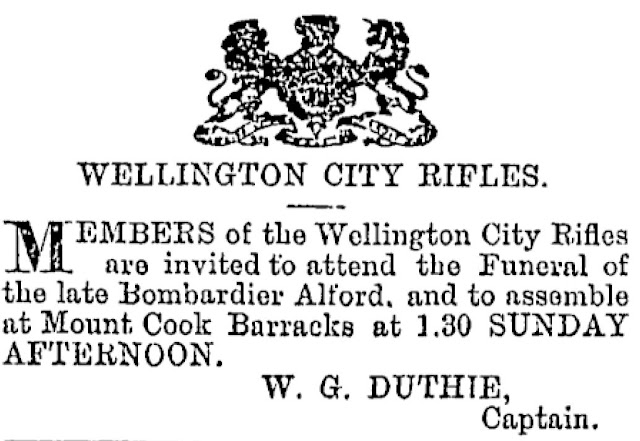 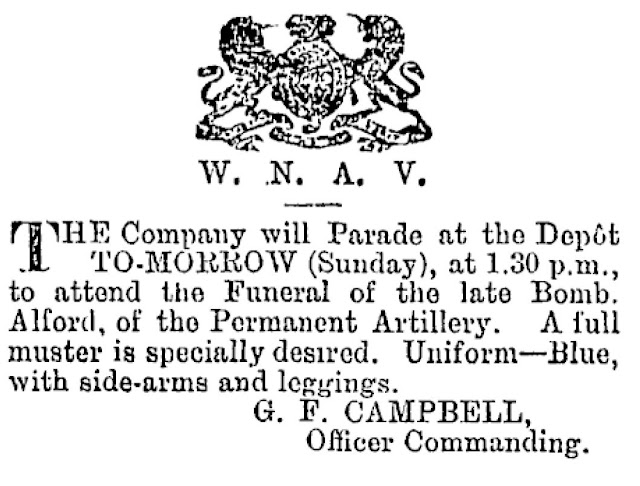 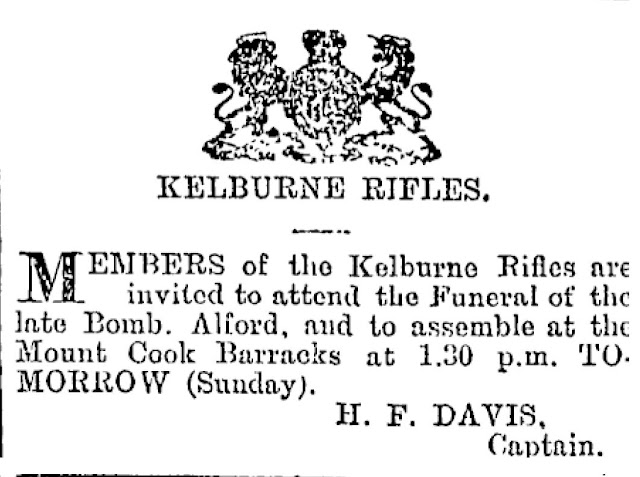 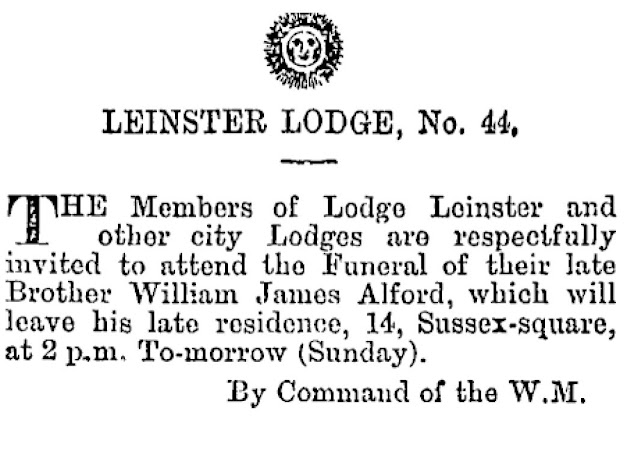 I also found a notice announcing the marriage of Emma and William ten years earlier. The only notice I found was in the Auckland newspaper so maybe William was living there at that time and he certainly had property in Auckland when he died.


The family gets bigger.  I found the births of two children. Ruby Eleanor Alford was born 1890 and Arthur Vincent Alford was born in 1892. At the time of his death the Alford family was living at 14 Sussex Square but his probate papers mention a house on land in Albert Rd, North Shore, Auckland and land with two houses in St Aubyns Rd, North Shore, Auckland. (Both streets are in the Devonport area of Auckland) He was living in Auckland when he was promoted from Gunner to Acting-Bombadier a year before he died.

Arthur worked as a carpenter and enlisted in the army in WW1. He served in Egypt and France. He also enlisted in WW2 and served in the home militia. According to his army papers he married in 1940 but the name of his wife is not given. Arthur died 17 Feb 1979 in Auckland, New Zealand.

William's widow, Emma, married again in 1900 to Berry Osgood Cozens. She died in 1935 aged 70. She must have been born about 1865 making her ten years younger than William James Alford.
Posted by Boobook at 3:21 PM