The bluestone hotel at Inverleigh was built about the 1860s where the road from Geelong, the Hamilton Highway, crosses the Leigh River. It's still there, still standing sturdily. I photographed it in the 1980s and again last year after it had been purchased by several locals and refurbished. It is now a funky country pub.

The above photos are all in my family album because it was owned for about twenty years by my husband's great-aunt Hannah Warrington and her husband John. I presume John and Hannah are in the first photo but we have no way of proving it.

Hannah ANDREW and John WARRINGTON were married in Huntingdon, England in 1851 and migrated to Geelong, Victoria in January 1853 on the 'Six Sisters'. They lived in Geelong and Mugheboluc near Geelong before moving further west to Ondit. I think they were farming but there is also a record of John working as a mail contractor so he was probably finding work where he could. Hannah's parents and siblings also migrated in the 1850s and by 1856 they were all living in the Inverleigh area.

In 1878 Hannah and John sold up at Ondit and moved to Inverleigh when they took up the licence of the Inverleigh Hotel. The publican's licence was in Hannah's name.

The Warringtons are mentioned several times in the local newspapers over the next twenty years. The first is when their stables were deliberately destroyed, but they are also mentioned in several newspaper reports because they were caught serving alcohol after hours


Hannah and John had 14 children but only four daughters survived. And only two of those daughters had families of their own but their descendants live in the area today. 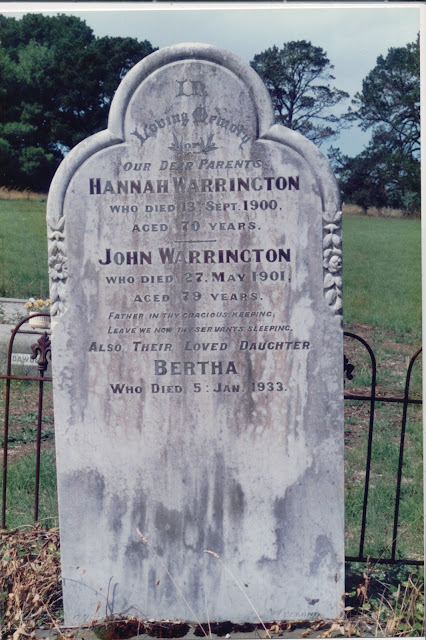 This post is in response to the Sepia Saturday theme photo of Chittenden Hotel in Ohio.