You know the saying. 'Behind every successful man there is a good woman.' Well there was a 'good woman' in our family. Her name was Euphemia and she was my husband's great-grandmother.

Euphemia was a daughter and a wife, a mother and a grandmother. She lived in Victoria, Australia for 75 years and was never an 'independent' woman or a 'career' woman. She was the daughter of a farmer and the wife of a farmer/butter manufacturer/storekeeper.

Charles Yeaman was born in Scotland and his mother's name was Euphemia Craig so naturally he would want to name his daughter after her. His English-born wife probably yielded willingly because almost all of Euphemia's siblings were given family names.

Euphemia in Greek means 'speak well' (euphemism comes from the same roots) and has never been especially popular as a name for girls, but it was used fairly frequently in Scotland up to the 1800s. Nicknames were common too so some of the Euphemias were called Effie of Phemie or even Mia, and our Euphemia was called Pheme. And she wasn't the only descendant of Euphemia Craig to carry her name. She named her daughter Euphemia Evelyn Sims (known as Elvie) and a grandaughter was called Euphemia Joy Phelan (known as Joy), and there was also a Euphemia Paynter (known as Fame), Louise Euphemia Yeaman and Euphemia Elizabeth Rigby (known as Effy).

Until she was about nine years old Grandma Euphemia lived on a farm at Cobaw east of Kyneton and then her parents selected land at Tennyson about half way between Echuca and Bendigo. They were very good farmers, innovative and industrious. And so was the man she married about twenty years later, Charles Sims. He lived nearby, at Pine Grove, and as well as farming he established a store and a butter factory on his farm. (Descendants still own the farm.)

Charles and Pheme had six children while they lived at Pine Grove and then they left the oldest son on the farm and moved to Mitiamo, a nearby town that had grown up around the railway station. Charles was a very busy man because he ran a successful country store and had numerous other interests and investments as well as maintaining an interest in farming. Church was a very important part of their lives too. He and Euphemia were leaders in their community and for Euphemia life was busy too - as well as the normal cooking and cleaning and preparing for family and community events there was the unexpected.  During the Great War women knitted and baked and sewed for their soldiers, frequent letter writing was crucial. The family had a holiday house at Hepburn Springs too so like all holiday houses that too had to be cleaned, especially after it had been rented to other people.

Later in Euphemia's life another war took family members overseas to serve and once again the women in the community rallied.

Pheme was much loved by her family. I asked my father-in-law what his grandmother was like as a person and he said one word. Kind. She was a kind lady. And then he added that she was also an excellent cook. I could have guessed the latter because her daughters were great cooks. When I first met her daughter Annie (my husband's grandmother) she made an apple pie for dinner. From scratch. She made the puff pastry by breaking butter pieces over the rolled out pastry before folding and rolling and buttering again repeatedly. It was an amazing thing to see and I was properly impressed. I didn't guess that Euphemia was kind because in photos she looks quite stern, but there are hints. See in the photo below how her daughter is snuggling close and has one leg behind her mum? And notice in the family photo, above, that four of her children are touching their mother.

In 1936 Euphemia turned 70 and the family got together at Annie's house in Mitiamo to celebrate. You can imagine the preparation that was involved and the cooking that was done. It was a sit-down meal and the photo show a table laden with cakes and slices on stands, flowers, nibbles and who knows what else. The birthday cake has two layers and 70 candles. 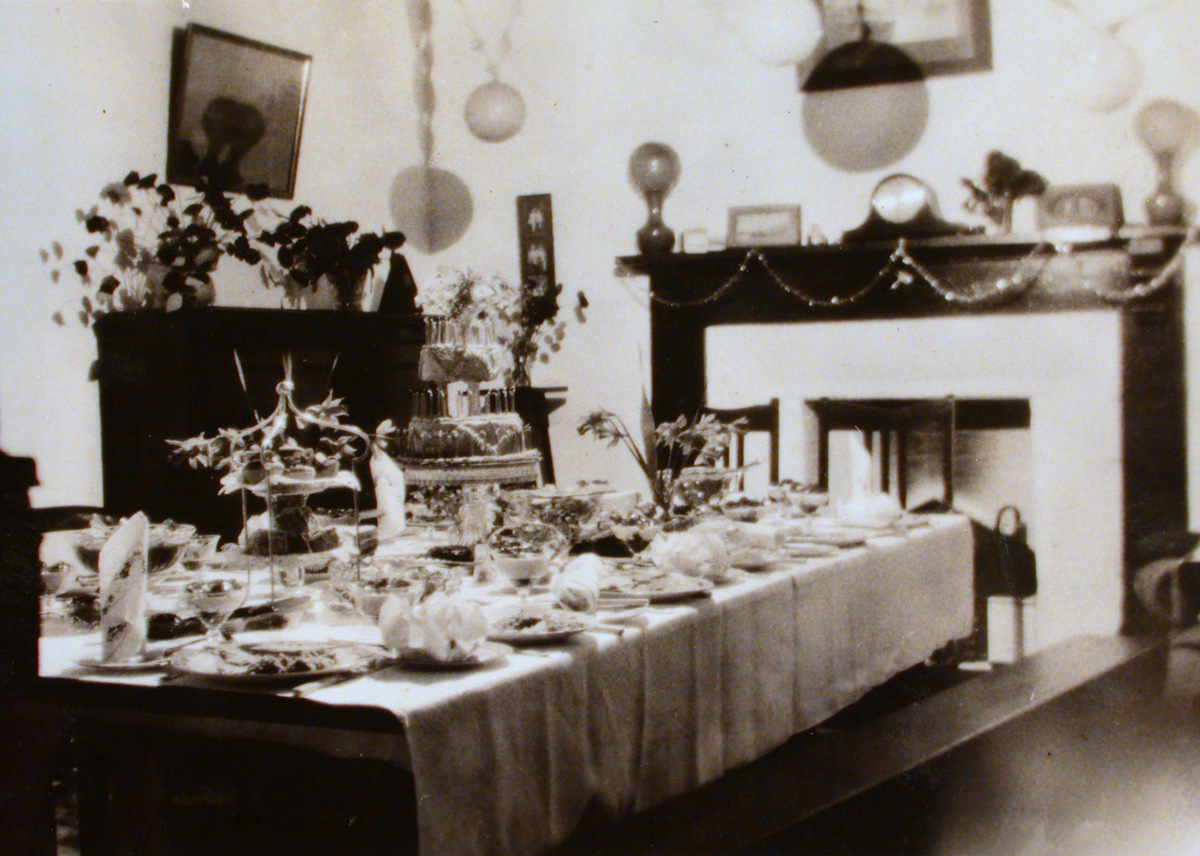 When Euphemia died five years later each of the children and her husband inserted a moving notice in the paper with phrases like "God's richest gift, our mother." and "A life made beautiful by kindly deeds."

This blog is in response to the theme photo for this week's Sepia Saturday. I suggest you make a glutton of yourself and wander over there to feast on other blogs.