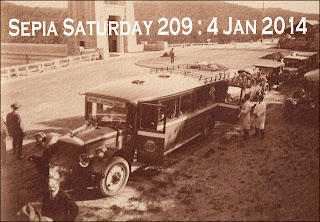 In 1947 sisters Shirley (22) and Mary Alford (20) went from Victoria to Adelaide, South Australia on the Overland train. They stayed in a bed and breakfast place in central Adelaide and for two weeks toured to various spots around Adelaide, Mt Lofty and Victor Harbor by bus and tram every day. Shirley said they had a really good time and still remembers is vividly, including a great meal they had at the Victor Harbor Hotel.

The photo shows Shirley (left), Mary next to her and two nurses from Bendigo they met on the trip. I like the dresses they are wearing, very sweet and stylish, and their hair styles are similar as well. Today's young travellers are much more informal. Note the name on the bus, 'Miss Touralia', and the bus company is Cosgrove's.

Shirley married in January the following year and Mary several years later. Both were school teachers in country Victoria.
Posted by Boobook at 4:10 PM