Voyage to Australia: the ship 'Violet'

A newspaper report indicates that the ship 'Violet' sailed from London on November 6, 1856 and then another report states that it was moored at Southampton until 20 December on demurrage.


Demurrage refers to the period when the charterer remains in possession of the vessel after the period normally allowed to load and unload cargo ). By extension, demurrage refers to the charges that the charterer pays to the shipowner for its extra use of the vessel. Officially, demurrage is a form of liquidated damages for breaching the laytime as it is stated in the governing contract (the charter party). The demurrage sometimes causes a loss to the seller as it increases cost of the total freight. Reference: Wikipedia


The Violet arrived at Port Adelaide, South Australia on 13 April 1856 after a voyage of about 122 days. On board were 237 emigrants including some of my husband's ancestors. John and Susannah ANDREW, their son John and his wife Rhoda with their young daughter Mary Ann, and John and Susannah's other son Daniel. (They are first on the list of passengers, below.) The captain of the ship was Henry Hall and the surgeon-superintendent was T R Tumner. 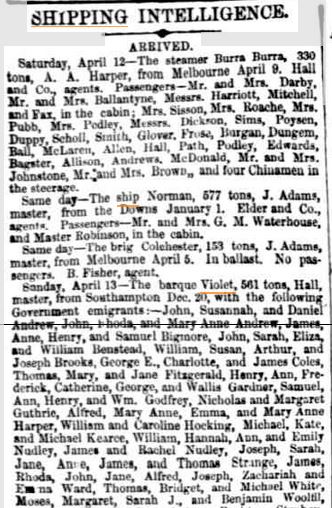 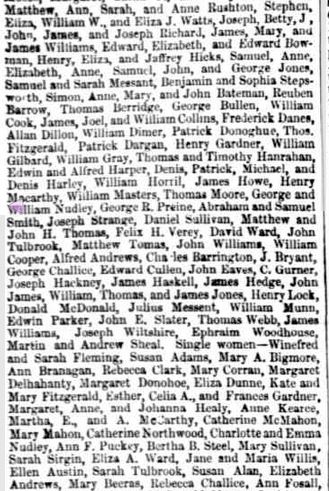 The surgeon-general reported that three births and six deaths on board and that the immigrants were 'generally a well-selected class of persons'. The six passengers who died were James Williams (10 months), Joseph Richards (11 months), Thomas Strange (1 year), Johanna Healey (45 years), Alfred Ward (10 years) and Mary Ann Harper (2 years). Their dates of death and causes of death can be found at www.shipslist.com and you can also find there a full and detailed list of the passengers (including the maiden names of the wives).

There is a newspaper report of a number of the passengers being violent, drunk and disorderly on board the Violet. Some were taken into custody and fined - a good start to their new lives in the colonies.

The Violet also carried cargo. Before she arrived the Adelaide newspapers published a list that must have been in one of the London papers, and another list after the ship docked.

The Andrew family had been living in Oundle, Northamptonshire when they decided to move to Australia. Their oldest son, William, was already living in the Geelong area of Victoria, and so was their daughter Hannah who had migrated with her new husband, John Warrington. It's a mystery why the Andrews decided to go to Adelaide rather than one of the Victorian ports because they certainly didn't stay in South Australia. They moved immediately to Inverleigh near Geelong, probably on a coastal ship, and later lived near Pyramid Hill in central Victoria. But that's a story for another day.

There is a certificate (the original is in the Pyramid Hill museum) that states that "Mary Ann Andrew, 13 months old, is free from measles and able to emigrate." It's dated 27 November 1855. So I think young Mary Ann must have had a bout of the measles that could have prevented them from sailing.

The Violet left Adelaide to sail for Singapore on 30 April. She carried mail for England.