Trove Tuesday: In which Germanton and Germantown are featured.

Christmas 1909. Edie from Germanton (NSW) sent her friend in Collingwood (VIC) a postcard wishing her a merry Christmas. I don't know these people because it's postcard I found at a market.

The card has a Greek or Roman theatrical theme that doesn't strike me as particularly relevant to Christmas but then I shouldn't be too critical because someone in a hundred years time will look at today's cards in amazement or amusement. Or maybe they'll be sending each other e-cards instead of wasting earth's resources. Or maybe the tradition will have died out altogether by then. 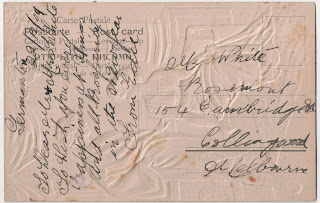 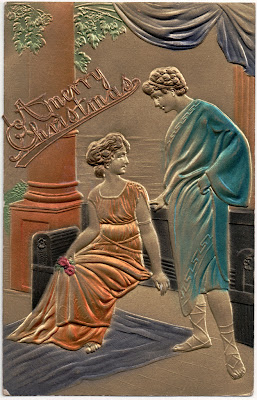 I wondered where Germanton was because I'd never heard of it, and it sounds similar to Germantown (now called Grovedale) near Geelong. So I searched the newspapers on Trove.

It turns out that in 1909 Germanton did indeed exist but a few years later the name was changed to Holbrook because of hostilities in World War 1. The area had been settled by a large and industrious community of German families from the mid 1850s.

The same thing happened to Germantown near Geelong. The area was settled by many German families from the 1850s onwards and they had developed vineyards, orchards and vegetable gardens. In July 1915 the council voted to rename it Cornwall, one of the titles of the King, but the name was later disallowed because it was already in use in Victoria so the name Grovedale was chosen.
Germanton and Germantown weren't the only towns and localities in Australia to have a name change because of the war. And it wasn't just the town name that was changed - hotels, railway stations, sport teams and numerous other examples can be found. Why did they go to all that trouble? The residents with German background had been here for two or three generations and weren't stirring up trouble at the time but there were certainly tensions in the town. It must have been an uncomfortable time for all residents of German background.
Posted by Boobook at 6:03 PM