I'm on a roll with the Chaundy family. After my last blog, about William Henry Chaundy's letter, I dug out the file and rechecked some earlier bits and pieces - correspondence with relatives who have since died, photocopies from the early days when I didn't always record my sources, scraps of notes. One of the items I found was this:


Wilkinson Scrap Book No. 2, p10. Pamphlet 437
Chaundy W. H. [1]1852-4
A reverie concerning Oakleigh, by W Round[2].
...in the early part of 1852 I became a fellow boarder with W H Chaundy in King St, Melbourne. We speedily discovered that we came from adjourning counties, Berkshire and Oxford & accordingly we fraternised & became friends. In the month of July in that y[ea]r he became a happy man being married to the girl of his choice[3] at St James Church by the late Dean Macartney, having first provided a cage for his (live) bird in the shape of a two-roomed cottage in Chapel St, Prahran, the ground on which it stood, 28 ft frontage having been paid for with a pound of gold; the site is now the well-known dental est[ablishment] of French (formerly Webb). I was always a 'welcome guest' at the cottage in question, frequently spending Sun[day] there, walking to & from Melb... My first view of Oak[leigh] was in this wise: I had walked as usual on a fine Sun[day] morning from Melb[ourne] to Chapel St when, after a short rest, Chaundy asked me to join him in a walk to Oak[leigh], as he was desirous of spying out the land on the north side of Scotchman's Creek, with a view of becoming a purchaser of a small block. I well remember that it was a particularly hot day, at the end of 1852, & I was highly pleased on reaching the hostelry presided over by the then Widow Atkinson (afterwards Mrs Crawley) to obtain rest & refreshment. Afterwards, feeling like a giant refreshed, we crossed the creek, which, being summer time, was comparatively dry, inspected the land, & an acre lot was chosen; the price being the rather astounding one of £45 an acre; the owner was Collings & the agent T Ham...We then wended our way back to Prahran...C[haundy] afterwards erected a comfortable house on the land, & also purchased a 2nd acre, the number of trees on the spot the attraction. His brother [George[4] who lived] at Ferntree Gully 40 years also bought an acre & a relative, Thomas Green[5], purchased a 4th acre; the latter a few years after, wishing to sell, only obtained £5 for it. But alas a sad misfortune happened to the pioneer, for in felling a tree that was thought to be too near the house it came down on the house and smashed it in two. Fortunately his wife & 2 children were standing a safe distance away, so no one was hurt, & a fresh building was at once erected....In the middle of 1853, C[haundy]'s eldest sister[6] returned from a visit to Eng[land] & took up her abode temporarily with her brother, accompanying him on his removal to Oak[leigh]. She became my lode-star, the result being that every Sun[day] during the summer of 1853-54 I could be seen trudging along the track from Prahran to the township.

I don't know where I got it but suspect that it was sent to me by a relative/fellow researcher. It must come from a historical society in Prahran or Oakleigh I think. The footnotes are mine. One day I'll chase up the original but in the meantime it provides some useful information about the Chaundy's early days in Victoria.

And then I got to thinking about William Round. I've known that he married my great great aunt, Elizabeth Chaundy, that he was a law clerk, that they lived in the Prahran/Windsor area all their married life, that they had a large family. But I didn't know he was an interesting person until I checked Trove and found his obituary. This is just a small section of it but it shows he was passionate about local history and, judging by the scrapbook entry, had a sense of fun. 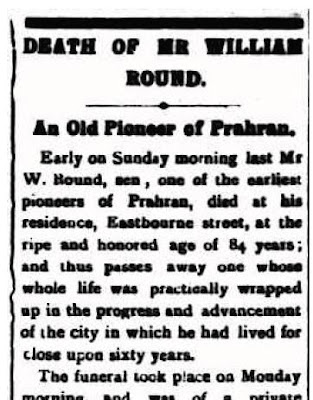 Every now and again I have a nibble at trying to trace the Thomas Green mentioned in the notebook but so far without success. William Henry Chaundy's mother was a Green so I presume he was possibly a cousin. I'd love to contact a descendant.
Posted by Boobook at 12:17 PM