Thomas Round was a first cousin of my great-grandfather. His parents were William Round and Elizabeth Chaundy who lived at Prahran, Victoria. I've had Thomas' name on my tree for a few years but nothing else other than his birth and death dates because he died in Victoria when he was 15 years old.... I thought.

Last night I was Troving - just checking this and that, following random thoughts - when I landed on this newspaper article.

That's a surprise!! Thomas didn't die in Victoria. He was lost overboard from the barque 'Formosa' off Cape Leeuwin, Western Australia. So, of course, I then searched Trove for more articles about the incident.

The first article I found was a poem that his father wrote. William Round, a law clerk, was a prolific contributor to newspapers (I've written about him here ) so the fact that he published a poem wasn't a surprise, and it really is quite poetic. The first poem has the footnote 'Europa' and the second 'Camellia'. I like the first better and can't work out if William was the author of the second. 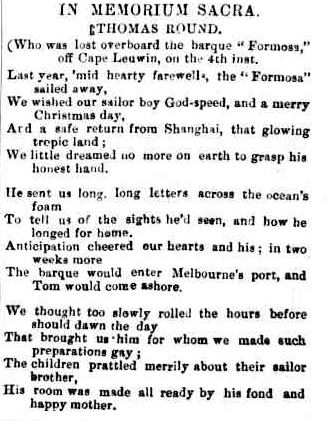 IN MEMORIUM SACRA
THOMAS ROUND
(Who was lost overboard the barque “Formosa” off Cape Leuwin, on the 4th inst.)

Last year, ‘mid hearty farewells, the “Formosa” sailed away,
We wished our sailor boy God-speed, and a merry Christmas Day,
And a safe return from Shanghai, that glowing tropic land;
We little dreamed no more on earth to grasp his honest hand.

He sent us long, long letters across the ocean’s foam.
To tell us of the sights he’d seen, and how he longed for home,
Anticipation cheered our hearts and his; in two weeks more
The barque would enter Melbourne’s port, and Tom would come ashore.

We thought too slowly rolled the hours before should dawn the day
That brought us him for whom we made such preparations gay;
The children prattled merrily about their sailor brother,
His room was made all ready by his fond and happy mother.

The ship arrived in safety, but all too soon we learned
That he whose merry face we longed to see had not returned.
His fellow-sailors told the tale (a tale, alas, told of),
At duty’s call he faltered not, but hurried up aloft.

While ‘midst the heavy breakers the ship was madly tossed,
And in that tempest wild our sailor-boy was lost.
Ah, bitterly we grieve for him, it seems too hard to bear,
Our darling boy for whose return we offered many a prayer.

But He holds the waves within the hollow of His hand
Knows what is best though first it seems so hard to understand;
He cheered his sailor-followers on the Lake of Galilee,
He stood beside our sailor-boy in that dread storm at sea.

And ’mid the grief of nature, we fondly realise
The thought that Tom has entered port – the port of Paradise,
His Saviour-captain gave the word, twas His divine behest,
Our sailor-boy has landed at that haven fair of rest.
EUROPA 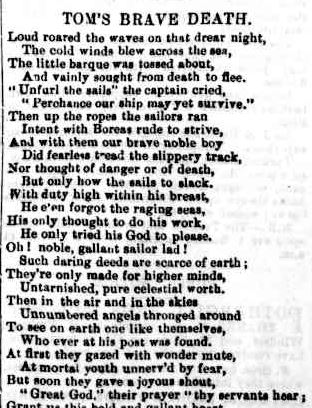 According to several newspaper reports young Tom fell from the foretopgallant yard during a stormy night and was drowned. The ship was unable to turn around to search for him.

I broadened my search of Trove newspapers and found another article, published three years later, that details how the Tom Pearce who survived the famous shipwreck of the 'Loch Ard' went to the same school (Mr McKenzie's Prahran Academy) as young Tom Round.

And finally, the reason Tom's death was registered in Victoria was not because that was his home state. It was because Melbourne was the first port of call after his death.
Posted by Boobook at 8:25 PM

Email ThisBlogThis!Share to TwitterShare to FacebookShare to Pinterest
Labels: Chaundy, death at sea, Round, ship Formosa