In September 1918 Roy Phelan was on the front line in France when he was badly injured, hit on the head by shrapnel. Somehow, in the middle of all the noise and mayhem, Roy was stretchered out and taken to a Field Hospital at Abbeville behind the lines, and then across the channel to England. He spent months in hospitals in England recuperating and was still very ill when he returned to Australia but recovered and lived a long and happy life.

His family back in Australia were informed that he was seriously ill and the first few letters they received from Roy after he was injured were written by a nurse. This one was written to Ann Sims who was later to become his wife.

29th Sept 18
Dear Miss Sims
3782 Pte R.J. Phelan, 46th Btn, asked me to write to you to let you know he was admitted to this Hospital, the Third Australian General, on the 18th inst.
He has a nasty wound in his head but has shown a slight improvement the last couple of days. He is quite cheerful again.
He asked me to explain to you that he will be unable to write to you for some little time yet.
He sends you his best love.
With best wishes
I remain
Yours faithfully
P. Murdock
(Aust. Red Cross) 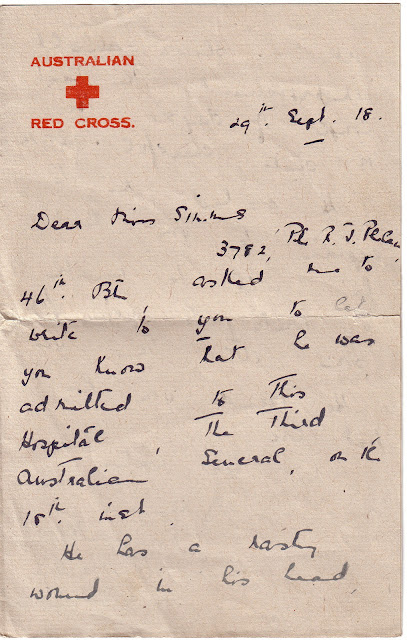 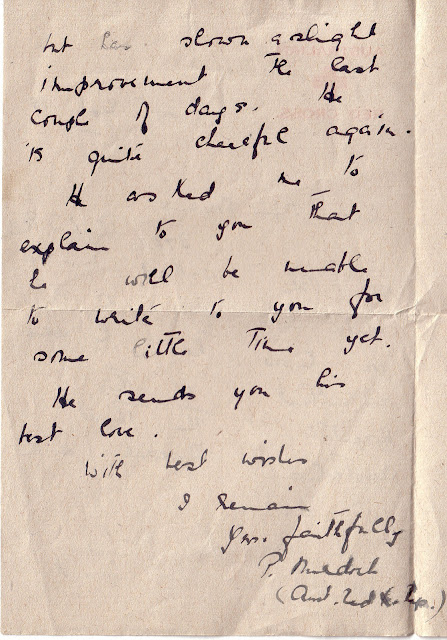 Amazingly, I found a photo of Miss Murdock and the other nurses who served at the 3rd Australian Hospital on the Australian War Memorial's website.

Roy gradually recovered his health and his good humour and wrote home about some of the concert skits and social occasions he had been involved in and made light of his health problems. But some of his treatment must have been truly awful and he would have seen his fellow inmates going through some tough times as well. He sent home these two postcards. Maybe laughter is the best medicine.

This blog was in response to the Sepia Saturday theme image below, a cutout bookmark advertising medicine. I can't imagine what medicine Roy would have had to take but you can see what others have written on the same theme here.