These four photos are in a Phelan family album. It's Bondi beach, Sydney, some time in the 70s I think. Bondi isn't in our patch so it must have been a holiday. I suspect that the photographer didn't even venture on to the beach because the photos appear to have been taken from a car park, and probably on the same day. They probably just went to have a look at the famous beach. Nowadays about three million people a year visit the beach - but not all at the same time fortunately. On a warm weekend in summer you might have to share with only 40 000 other people.

Coastal New South Wales is almost like a foreign country to us because we never visited when I was a child growing up in the neighbouring state of Victoria, and my husband's family was the same. If we wanted a day at the beach or a holiday on the coast we went to one of the numerous sandy beach towns along the south coast of Victoria. And we never saw crowds like this. Sometimes we had the long stretches of sand to ourselves.

One disadvantage of our beach visits was that we didn't have surf lifesavers watching, we didn't have to swim 'inside the flags' (note the red and yellow flag on the left of the first photo), but luckily none of us ever had a mishap in the ocean. This beach is the home of the first lifesaving club, established in 1907.

I've never been to Bondi. Should an Aussie admit to such a thing?

The baths are saltwater and tidal and have a heritage classification. In fact, the whole beach has a heritage value. The baths are also the home of the Bondi Icebergs, a club for people who swim there throughout the year. 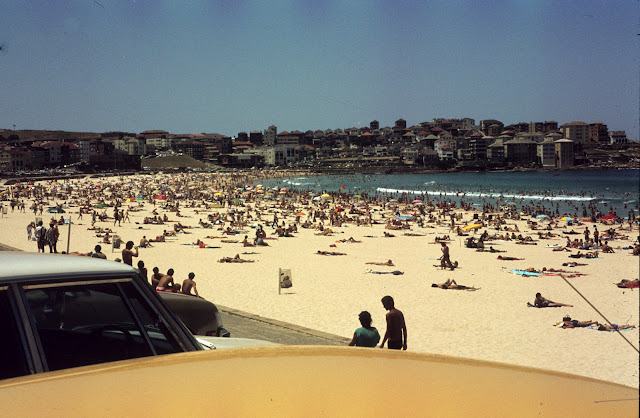 This photo was taken on a different family holiday at Mission Beach in Queensland. Warm days and kilometres of sandy beach to share with ... hardly anyone else.

This post is in response to the theme photo, a postcard of Bondi as it used to be. You can see more responses over at Sepia Saturday. Or you could pack your bags and head downunder in time for summer.