Sepia Saturday: The opening of a wharf

It was 18 November 1960. I remember the date well because it was the day my grandmother, Myrtle Smith, died and it was the day the children from schools in the Portland district were involved in a series of choreographed routines to celebrate the opening of the KS Anderson Wharf in Portland's harbour.

It must have been a difficult day for Gran's two daughters. Betty (and Doug) and her son Rex were living with Gran in Portland at the time, and Mavis (and Angus) was living half an hour away with me and my four siblings. Rex, John, Kaye and I were all involved in the events and we had been practicing for weeks so, as they say, 'the show must go on'. We had special costumes to wear as well. Here we are outside Gran's house all dressed up ready to go. My young sister Kaye is in the photo above.

Portland has one of the few natural deep harbours in Victoria but the advantage of that was lost because they didn't have a big enough wharf or storage sheds. So Mr KS Anderson et al lobbied and lobbied and finally the wharf was built. The opening of the wharf was a big deal in the town and the celebrations were spread over a whole week. Here's one photo I found on the local library's website. It shows the official opening of the wharf. 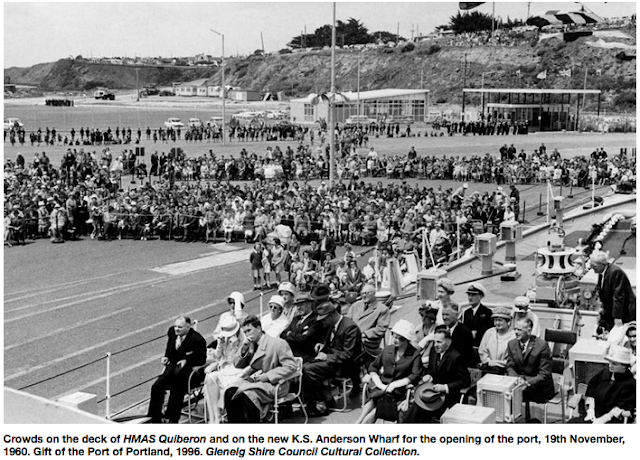 But the construction of the wharf in the 1950s and into 1960 was a danger to life and limb! On the library's website there is reference to a film that was made in 2010, in which some of the workers on the project were interviewed. This is a quote:

In January 1961 a ship tied up at the KS Anderson wharf and the loading of bulk oats commenced. The Victorian Oatgrowers and Marketing Co Ltd had been granted exclusive use of the transit shed on the wharf to store the oats. It was the first bulk shipment from a Victorian port.
Source: Final Report of the State Development Committee on the Bulk Handling of Oats and Barley in Victoria, 1963. www.parliament.vic.gov.au/papers/govpub/

If you want to see more dangerous situations you could wander over and have a look at other Sepia Saturday blogs posted in response to this Sepia Saturday theme photo.