The theme photo for Sepia Saturday this week features people sitting on rocks. So I selected half a dozen photos to post ... and then decided to just go with one.

My parents, Mavis and Angus Wyllie, are in the photo - dad standing with his hands on his hips and mum sitting at his feet with me on her knee - as well as dad's mother, his two sisters (Barbara and Dorothy) and mum's sister, Betty, with my cousin Rex on her knee. So it's easy to date the photo to 1950.

The location is also easy. It's Venus Baths near Halls Gap in the Grampians, Victoria. Here's a modern photo taken in the same location.
For over a hundred years the Venus Baths has been a very popular spot, a short walk from Halls Gap and very pretty. I've been there lots of times because the Grampians mountain range has always been a family holiday and day visit spot, and a walk to the Baths was often included. In 1950 all of the people in the photo were living in and around the Minyip area of the Wimmera, an hour or so to the north. Later we all moved from Minyip but were still living close enough to visit the Grampians. We loved it and so did lots of other people. It's now a very popular National Park. 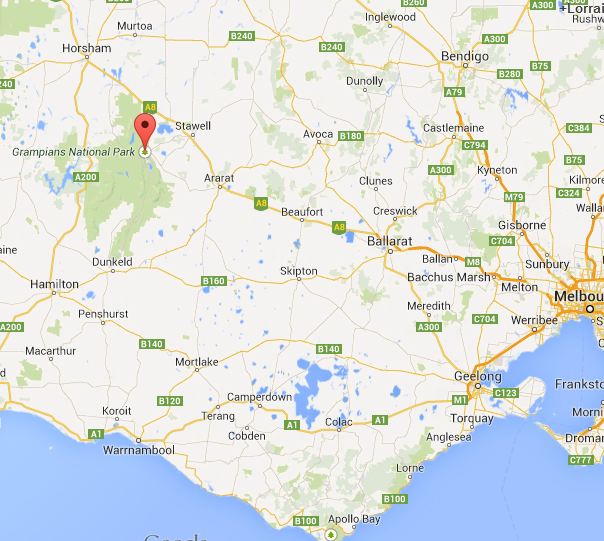 Nature has given the Grampians a bit of a battering in the last few years - several major fires including one a few weeks ago, and a severe rainstorm that damaged a lot of the major walking tracks and infrastructure. Venus Baths was also a casualty. The rock pools themselves were unscathed but the course of the creek was changed by rockfalls and slips, there was a lot of erosion and the track and footbridges were extensively damaged. The track was closed until everything could be repaired. I haven't been there since it was reopened but is on my list of things to do, and when I go I must remember to sit in the same spot for another photo.
Posted by Boobook at 11:35 PM