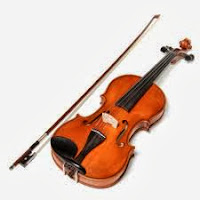 I remember the violin on a high shelf in our spare bedroom. And then we children wrecked it. None of us learned to play it, my parents couldn't play it. My mother played the organ in church, we had an organ and a piano (and the ubiquitous wooden recorders) and several of us had piano lessons, but we weren't brought up listening to classical music (or even fiddle music) so I don't ever remember thinking I'd like to learn how to play the violin. Somehow we were allowed to play with the violin instead, so gradually it was ruined.


I never thought about whose violin it was but now I know that it belonged to my father's great-uncle Jim. Dad's older sister, Dorothy, told me that Uncle Jim played with the Salvation Army band in Warracknabeal, playing on the street.

Jim and his siblings were born in South Australia and it appears that the family moved from Mt Gambier to the Horsham and Minyip districts of Victoria in the 1870s. There were four surviving brothers, Robert (my great-grandfather), William, John and James. James was born at Mt Gambier in 1868. He never married.

When he was about 25 James was working on a farm at Kellalac when he was kicked in the head by a horse. The result was a fractured skull (I was told he had part of his skull removed) and brain damage that affected him the rest of his life.

On 30 October 1894 James Wyllie was admitted to Ararat Lunatic Asylum and discharged 13 December 1894 as 'cured'.

About 30 years ago I wrote to Aradale to see if they could provide me with any information and was most surprised to receive a little package back. It includes the dates Jim was admitted and discharged and copies of the Victoria Police Reports generated when Jim was arrested. The reports are quite detailed and describe his address, sober habits, that his mania wasn't dangerous to others, that he was quiet in custody and not under restraint. The first report doesn't describe what behaviour precipitated the arrest but the result was his admission to the asylum at Ararat. It must have been a horrible place. I know little about its history but there were about 1000 inmates, male and female in separate wings, and up to 500 staff. It has since closed.

James was admitted again in 1905 according to this newspaper notice...

... and again on 6 September 1908. This time he wasn't discharged until four years later, on 1 October 1908. This time the police report records that he led a sober and industrious life at Warracknabeal (where he worked in the flour mill) but was arrested because he 'says he is Jesus Christ, prays on his knees on the footpath and tries to impel others to do the same'. Whilst in the custody of the police he was excitable, shouting and praying and was constrained in a strait jacket.

My aunt remembers visiting Uncle Jim at Warracknabeal with her parents but when they approached the house he would disappear out the back so they would just leave the food and other items and just leave. Eventually, in 1937 when he was 60, the Salvation Army rang the family to say that he was in hospital. When he died he was buried in the Minyip cemetery after a service at Warracknabeal. His house was sold and the proceeds divided between his nieces and nephews.


You know what? Now that I know his story I wish we'd treasured Uncle Jim's violin.
Posted by Boobook at 9:47 PM