I've blogged about Rhoda Andrew before. She lived a quiet life on her father's farm in country Victoria. For about a year in 1888, when she was 18 or 19, she wrote a diary that has now been transcribed. The diary has provided a number of useful clues in my family history research. Rhoda died of influenza when she was 30 and her mother died a few days later. Her father, who was also ill with the influenza, survived.

On 21 January 1888  Rhoda wrote about her mother, also called Rhoda.


Saturday Jan 21st [1888].This afternoon Kate took Mother out for a drive, the first time since her illness, I am so glad dear Mother is getting better and is able to get out a little; I do hope she will improve, I am sure.

I was wondering what her mother's illness might have been but then I remembered that I had a copy of a newspaper cutting that someone in the family had kept. It was an obituary of Rhoda's mother that had been published in a church magazine. I've yet to find the source but I think it would have been Wesleyan Methodist or Methodist because the Andrew family were active members of their local church community. The obituary describes in quite a bit of detail the long-term ill health of Rhoda.


In Memorium (Mrs. Andrew)Since I knew the late Mrs Andrew she was somewhat of a recluse, through delicate health, mainly. During her whole life she was a fond and kind mother, a most devoted wife, very charitable and good to everyone; would divide her loaf with any who needed. Several of her babies died in infancy, and she grieved over the lost ones. She often seemed at death's door, from frequent attacks of asthma. Then another complaint gradually grew on her, which disabled her from walking much and getting to God's house regularly, also the necessary change of scene and fresh air. And being unwilling to let a doctor advise and help her she consequently suffered most severely in late years. Though the change of climate into the north improved her so much that there was little trouble with her chest, until that severe attack of influenza some years ago which weakened her so much that she never quite got over it. Not many knew how easily fatigued and how unfit for work she was. But patient and persevering how she would do the part when felt it her duty to do in the home. Through feeble health she did not in the outside public shine as brightly as many. She will, I feel sure, have stars in her crown. She leaves a good name to her children and grandchildren. May they through grace Divine follow in her footsteps and meet at God's right hand.
M.A. Midgley[Church publication]

So what facts was I able to glean from the obituary?

From other family information I know that the church they attended was the Woodlands Wesleyan at Central Mologa. The church was just up the road from the Andrew's farm that Rhoda's father and grandfather selected in the mid 1870s. I searched Trove for mentions of Woodlands Wesleyan church and found several articles. In 1877 the church was badly damaged in a wind storm - I think the community must have rebuilt it - and in 1887 they celebrated an anniversary.

And the last one I found was about a bazaar to raise funds for a parsonage (possibly at Kerang). 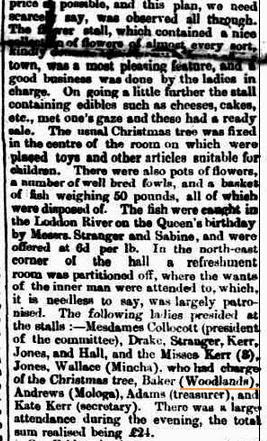 Because the last newspaper item coincided with the year of Rhoda's diary I was able to check to see if she had written about the family's involvement in the fund-raising. And sure enough...

Mrs Hare and J. Wood came today, and of course the baby too, bringing their bazaar things.

Mary went to Pyramid in the afternoon, Miss Baker came in the evening. We sat up till late at night, doing Bazaar work.

.Mary had Jane Hiscock over today, to help with some Bazaar work. Jane brought over her contribution.

We went to Mrs Innocent's this afternoon for some fruit, and she was not at home, so went on for Miss Baker. We called again as we came back, found her at home this time, but could not get fruit tonight. Mrs I. is coming over tomorrow, so she said she would bring the quinces with her. Miss B. and Mary are working away tonight, for the bazaar, of course. Now I must go and help them, so no more for my "Diary", tonight.

Mrs Innocent came over in the afternoon. We were very busy, finishing baking cakes for the Bazaar. We got cleared away and swept up by night, so that's one good thing done.

We washed today. In the afternoon Louisa Hare came up with the dolls she dressed for the Bazaar.

The Bazaar was a great success and I'm so glad. It is nice when a thing is a success.

And finally, for this blog, an entry where Rhoda again mentions her mother.

Mary and I took Mother for a drive this afternoon. Just up to the Church, we made a Catalogue of the books in the Sunday School Library. We moved the organ, to the other side of the Church, because it is warmer there for the winter, and swept out the Church. So we did a good afternoon's work. No more for tonight. Goodnight.