Sepia Saturday: In which Annie and Roy enjoy holidays 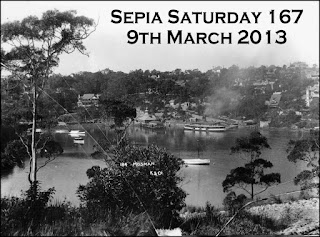 In the 1930s Annie and Roy went to Tasmania for a holiday. They lived in central Victoria so it was a bit of an adventure. First they drove to Melbourne where they put their car on a boat (it was lifted on by crane), then they sailed to Launceston in northern Tasmania. Then they drove around the beautiful island for several weeks before doing the trip across Bass Strait in reverse.

They took quite a few photos, including this one. It's taken from a lookout near New Norfolk in Tasmania and that's the SS Cartela on the River Derwent. As the article below states, she's a famous steamer in her 'patch'. I don't think Roy and Annie went for a ride on the ship. (By the way, those are hop fields by the river.)
Also in the 1930s, Roy and Annie went for a holiday on the Gippsland Lakes in eastern Victoria. The steamers that plied the lakes were very popular with tourists, and were often the most convenient way of getting about for the locals as well. This is their photo of the SS Gippsland as she pulls into a jetty.
In 1937 the SS Gippsland left the lakes for good. I don't know what happened to her after that. But I do know what happened to Annie and Roy. WW2 is just around the corner, two of their sons fought in the Pacific, their shop burnt down, they moved to Bendigo and started a completely different phase of their lives...but those stories will have to wait for another day.

Why don't you sail on over to Sepia Saturday to see what else is happening on the water.
Posted by Boobook at 12:02 AM