Trove Tuesday: In which Thomas is awarded a medal for bravery

Over the past decade or more I've been trying to track down several of my husband's great (whatever) uncles. I have records of their early lives and then they just disappear. Unfortunately their surname is Carter so when I google them or search on Trove I get lots of occupation records, and even when I use the double quotes to include their first names I get too many matches.

Nevertheless I keep trying. And I managed to get another snippet when I searched Trove with a name and last known location in Victoria.

It turns out that Thomas Carter was awarded a bronze medal for bravery in 1876. The newspaper report was quite detailed. 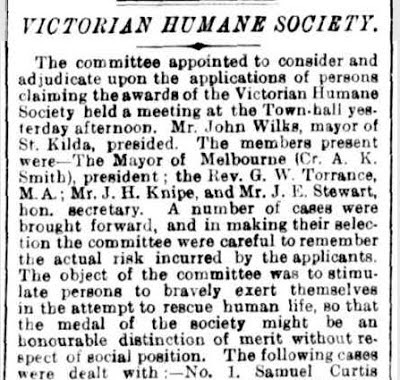 So, apart from the description of the rescue I was able to glean the name of his flour mill (I already knew he had one and that he had selected land in the area), that he was an auctioneer and that he was a general agent. I also found him a year or so later involved in a court case with his brother-in-law (my husband's ancestor) over debts, and some advertisements when he was declared a bankrupt. But after that? Nothing.

I've never actually been to Lake Cooper or Corop between Rochester and Shepparton in central Victoria but I found a photo on the web. I think the lake has water in it at the moment but when we had the decade-long drought in the noughties it was bone dry. From the newspaper report I'd say there used to be more reeds growing around the edge.

The Victorian Humane Society had only been established a year or two earlier (following a tragic instance of bravery) and still exists under a different name (The Royal Humane Society of Australasia). They have a webpage here that provides some of the history. And a book has been published that lists the recipients of the medals over the years but it's not in my local library so I'll have to have a look at the state library's copy.

I can't find an image of the bronze medal on the web. I wonder if Thomas' still exists somewhere.

Thomas CARTER, son of Joseph CARTER and Ann TURNER, was born in 1834 in Billingshurst, England. He died after 1882 (in Australia?). No evidence that he married or had descendants.
Posted by Boobook at 11:46 AM