Each week over at Sepia Saturday a photo is posted as a theme for contributors to blog about. 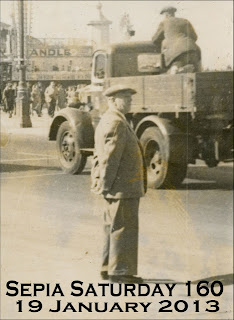 In 1939 a number of young men from the rural area of Mologa in central Victoria volunteered to serve their country. It was the start of World War 2. Shirley's mother, Mary Alford, was the local Red Cross coordinator and put a lot of time and effort into fund raising, recruiting members and making items for the soldiers. It must have been a cause close to her heart because her brother was killed in France in the first World War. For several years a truck was decorated and driven in Pyramid Hill, a nearby town (possibly at the annual show). Shirley and her cousin Mary Leed dressed as nurses, and two local men, Ernie Boorn and Dave Williams, as soldiers.