Some families are accident prone. The Browns certainly were. This account, for Trove Tuesday, is about one of the sons who drowned. The fate of the other family members is a story for another day.

David Brown* was the son of John Brown and Maryanne (nee Howe). Both his parents were Irish but met in Victoria, Australia. They married in Melbourne and moved to Geelong where John worked as a shoemaker. David, the second of  twelve children, was born there in 1852.

In about 1857 the family moved to Camperdown and then Cobden about ten years later. By that time David was about 15 years old and would have begun working as a labourer in the district. Apart from his baptism record, at St Mary of the Angels Roman Catholic church in Geelong, David didn't generate a paper trail ... until he died accidently at the age of 20. Then there are newspaper reports and inquest papers as well as a death certificate.

This is one of the newspaper reports that I found on Trove.


BALLARAT.
(FROM OUR OWN CORRESPONDENT.)
FRIDAY, DEC. 20.

The Camperdown correspondent of the Geelong Advertiser reports the following fatality :-" On Saturday evening, December 14, about 8 o'clock, a young man named David Brown, about 20 years of age, met with a fearfully sudden death, being drowned in Lake Purrumbete, near the residence of the Messrs. Manifolds, about five miles from Camperdown. It appears that Brown, who was an expert swimmer, went out in a flat-bottom boat for a pull. Shortly afterwards, some lads who were fishing near heard screams, but could see nothing but the boat, it being just dark. They at once gave information, and drags have been continually going up to the present time without the body being found. Just about where the boat was seen the water is about 40ft deep, but a little further out it is upwards of 150ft, so that it is probable some considerable difficulty will be experienced in finding it. It is conjectured that Brown must have become cramped, for though the water is deep, it was but a short distance from the bank where the accident occurred."


I also used Trove to look for pictures of Lake Purrumbete which is a freshwater lake near Camperdown and Cobden in Victoria's Western District. Under the 'Pictures, Photos, Objects' tab I typed 'Purrumbete' in the search box and found thumbnails of several interesting photos including this one and an oil painting (on display in the National Gallery of Australia) by Von Guerard that depicts the lake as it was in 1858, 'Purrumbete from across the lake'. Von Guerard is well-known for the detailed accuracy of his paintings so I can readily imagine the scene of the accident. Here is a photo of what the lake looks like today. 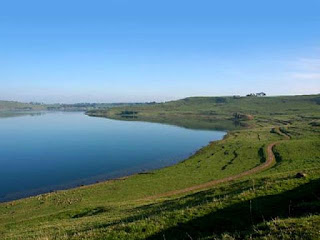 I've also used the Trove website to start a List for the Brown family, called, well, Brown Family. OK, OK. It was my first List. I'll use a more useful title next time. If you've haven't yet started a List (or two or three) on Trove I can fully recommend that you give it a go.