We started with a 'mud map', a rough sketch that had been drawn by someone at some stage to show where the old Duckett family home was in Wedderburn, Victoria. 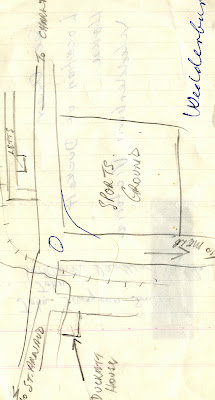 Then we found an old map that showed that Gabriel Duckett* had owned a block of land in an area that matched the mud map.

Next we studied a family photograph, taken in about 1910, of some of the family standing on the front verandah of the house that they lived in. Note the verandah decoration and in particular the missing section.

﻿
Armed with all of the above my Uncle Arthur went to have a look in 2010. And, to his surprise and mine, found that the house was still there - complete with damaged verandah decoration!