Part seven. Great-grandfather George Smith's diary continues. He leaves Perth to spend several days at Glentromie Station. He seems to have been impressed by the farming country and considered going farming there himself.

5 July 1889 Left for Glentromie. Travelled until quarter to two next morning at Bindoun [Bindoon].
6/7 Left at 8.00 for Glentromie arriving at two in the afternoon. Strolled around the homestead.
7/7 Strolled around. Went riding and turkey shooting and in the afternoon went to the Spanish Mission [New Norcia]. A very interesting place. Our party was showed all over it by the Bishop. There was on the mission 50 monks and 300 natives.
9/7 Morning went to see the station men plowing the ground was very wet but the crop that was in looked well. I and Mr Alpine left for Gilford [Guildford] 11 a.m. came to ... and put up for the night. A pleasant ride of twenty-eight mile.
10/7 Left Wellese [?] at seven a.m. on a fifty mile journey. Passed through some very nice country. Saw some good land which was sold in 1887 for 15/- an acre. Arrived in Gilford 6 p.m. put up for the night at Jutes Hotel. Went to a concert in the evening.
11/7 Started for Perth on the 8.30. Visited Henry Wright, also the government printing office, got the land regulations.


Glentromie is about 120 km from Guildford. Bindoon is about 70 km. George doesn't say in his diary how he travelled. Was it by coach? Was there a train line? For the journey back to Perth he talks about 'a pleasant ride' so he may have had access to a horse.

Why did George go to Glentromie? Maybe he wanted to check out the possibilities of farming there, maybe he'd been talking to someone, maybe he just wanted to see the Spanish Mission. As described in the article below, Glentromie was a very large, innovative and efficient property and the owners welcomed visitors. 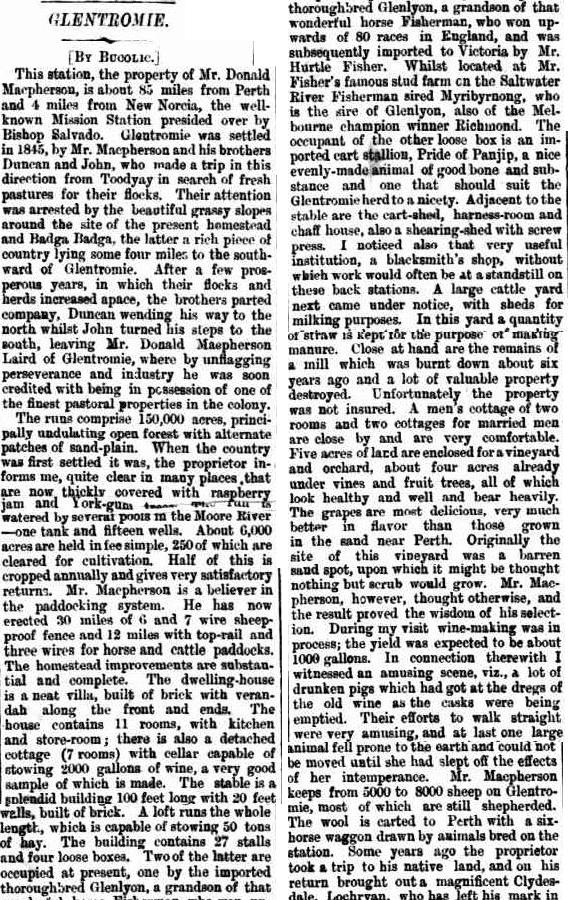 In fact, McPherson died that year, 1887, and the property was found to be heavily mortgaged and had to be sold. Walter Padbury bought it and the new manager was Charles Davidson from Victoria who was married to the new owner's niece, Amelia, so they may have been in residence when George visited. According to this site the homestead still exists. The homestead complex was placed on the state's heritage register in 2013.

The Spanish Mission at New Norcia is also mentioned in the article. It still operates today and is a very popular tourist spot. It was established in 1847 as a Benedictine Mission and many of the old buildings remain. Many of the monks were Spanish and Bishop Rosendo Salvado's  "original vision was to create, among the indigenous peoples of the Victoria Plains, a Christian, largely self-sufficient village based on agriculture. However, after the decimation of the local populations by introduced diseases in the 1860’s, he concentrated his activity on giving a practical education to the indigenous children who were brought to New Norcia from all over the state. Like other missionaries of the nineteenth century, his aim was to ‘civilise and evangelise’ according to the European ideals of the time, but he did so with sympathy for indigenous culture that was rare in his day." The quote is from New Norcia's website.

George says in his diary that he was shown over the mission by the Bishop so I presume that would be Bishop Salvado.
There is an image of the mission in 1885 at the ANU - I can't reproduce it here but you can go and view it.

To be continued. George goes back down the line to work along the Great Southern Railway.
Posted by Boobook at 4:45 PM