On a personal level we remember family members who served in war. My husband and I remember these grandparents and great-uncles who voluntarily enlisted in WW1. Two were killed in action.

Angus was a farmer at Carron, north of Minyip in the Wimmera district of Victoria, where his parents, Robert and Jeannetta, had created a prosperous wheat farm and built a home.

In July 1915 Angus enlisted at Ballarat. He was 30 years old. His initial training was a Castlemaine and Broadmeadows in Victoria.

On 1 April 1916 he embarked on HMAT A23 'Suffolk' and sailed to Egypt and the Middle East. In June he was transferred to France via the port at Marseilles and joined the 58th Battalion there. He was appointed Lance Corporal in December 1916. In February 1917 he was wounded in action, a gunshot wound to the shoulder, and after several weeks was transferred to Cheltenham and then the 3rd Auxilliary Hospital at Dartford in England. He was five months recuperating from his injuries and was discharged from the hospital 16 July 1917 and transferred to the training brigade at the Sandhill Camp at Longbridge Deverill, Wiltshire.

On 10 November 1917 he left for France via Southampton and rejoined his unit in the field 18 November 1917. In August 1918 he was promoted to Corporal and then a month later to Sergeant.

On 29 September 1918 he was again wounded in action. This time it was a gunshot wound to his left leg. He was again sent to England, to the Chester Hospital. The war ended in November and on 9 December Angus appears to have been transferred to AHQ at Hardcott in London. He was granted two months leave with pay and subsistence (21 April until 21 June) to attend a motor mechanics course at the Mansion Motor Training Garage in York St, Westminster.

Angus' maternal grandparents, William and Mary Ann Cook, migrated to Victoria from Plumstead in Kent in 1852. There must have still been some contact with relatives there, maybe his mother's cousins, because we have this photo of a visit. Angus is seated at right.


In July 1919 Angus departed England on the 'Demosthenes' and disembarked at Melbourne 14 September 1919. He had been in the AIF for four years including several long periods in the field of battle in France.

Like many diggers Angus had formed a relationship with a girl while he was in England and after the war he sent her money to join him in Australia but she never came. But all was not lost in love and war. In September 1921 he married the teacher at the school near his farm at Carron, Dorothy Cosstick. 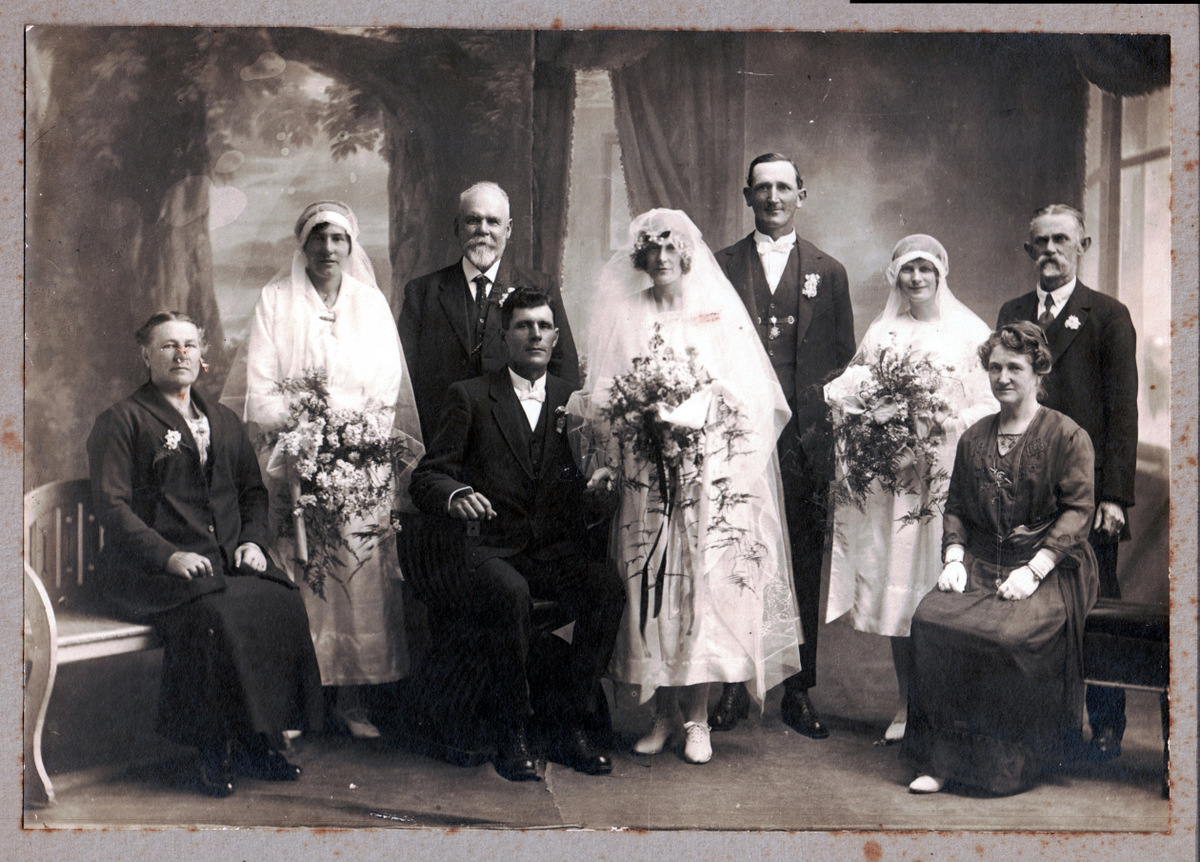 Australia was at war again when Angus was in his 50s and in March 1941 Angus enlisted in the army again. He was 56 years old. He served three years as a guard at Queenscliff on the coast of Victoria and he moved his wife and daughters to nearby Point Lonsdale. He was discharged in April 1944 because of his age and medical condition (he had arthritis in both knees).
Posted by Boobook at 11:39 AM