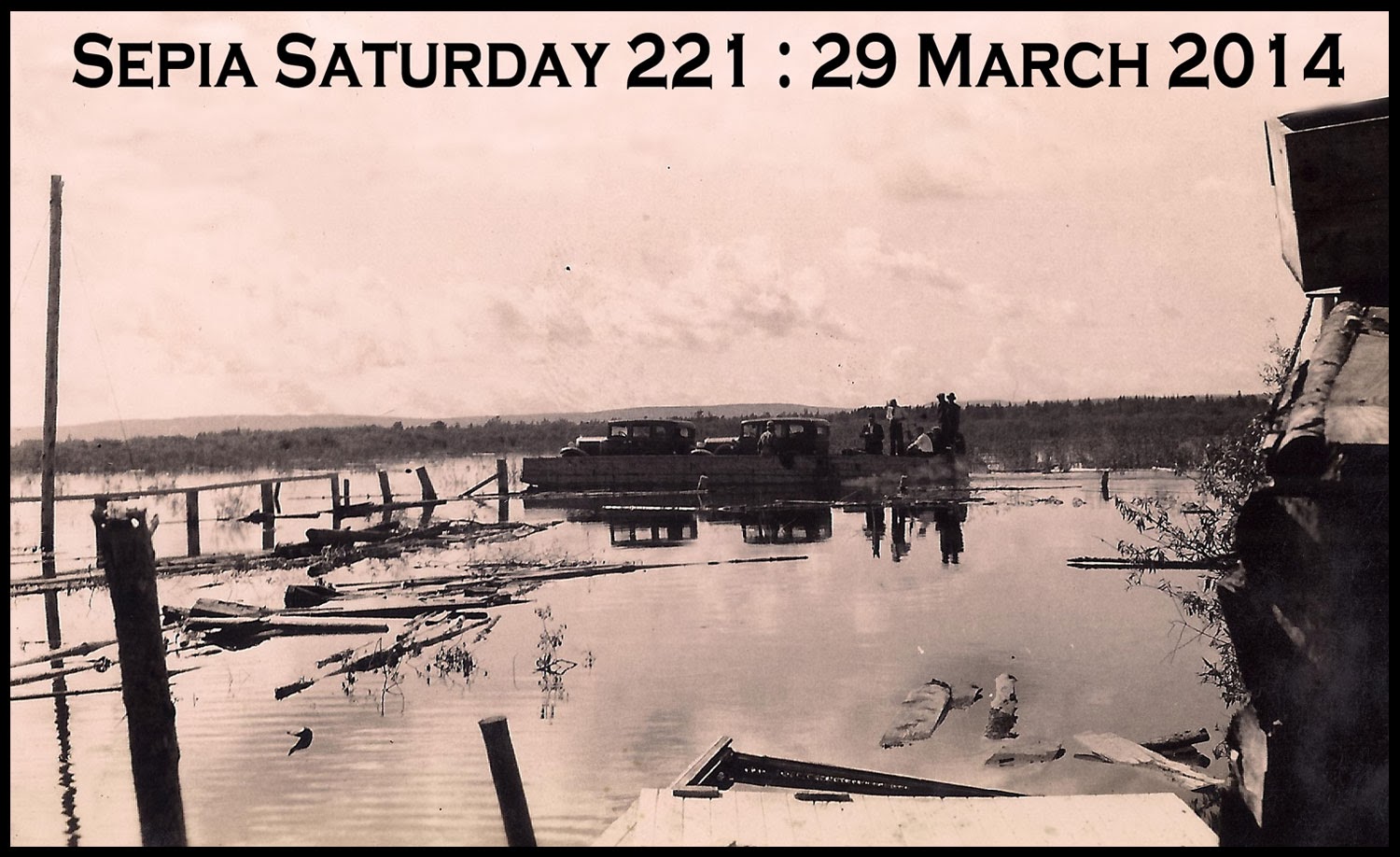 The theme photo for Sepia Saturday this week shows old fences, a flood and a barge or ferry with cars aboard. I was tempted by the ferry idea because I have a few photos in that category but settled on the flood. I hope they're not too ho-hum:)

We Australians all know a verse of a poem published in 1908 called 'My Country' by Dorothea Mackellar, but strangely it's the second verse we know, not the first. And part of it is most appropriate for this week's theme:


I love a sunburnt country,
A land of sweeping plains,
Of ragged mountain ranges,
Of droughts and flooding rains.

My husband grew up in northern Victoria where it is very flat and, for the most part, dry. But when it rains a lot the water just spreads out over the land and eventually drains north to the Murray River. It can take weeks to drain and is very inconvenient to residents, especially in past years when roads were just dirt that turned into mud. But of course kids love anything out of the ordinary so they're out to play in the flood waters.

An aside: One of the first things I do after I download my photos of the camera is straighten the horizons. But actually when I see the two photos above with their sloping horizons I think it adds to rather than detracts, but if I was to photoshop them I would straighten the horizons because they're 'wrong'. And I note that the younger generation taking selfies by the hundred don't worry about horizons at all! Call me old-fashioned but I prefer a straight horizon.

When he was about seven years old my husband's parents ran the Post Office and Telephone Exchange at Toolamba in central Victoria. It's not far from the Goulburn River that runs north to the Murray. Many, many rivers eventually drain into the Murray River - it has a huge catchment but the river mouth is continually dredged because mostly the flow is so meagre the sand continually blocks it. (Of course, irrigation and water storage complicate the issue now but it has always been a very seasonal river.) But I mustn't get myself side-tracked. In about 1955 the land around Toolamba and the Goulburn River flooded and the house/post office was surrounded by water.

Auntie Lena lived in the mallee, nearer to the Murray River and in an even drier area. So when it rained after years of dry it was worthy of a photo. Here she is standing on an island in a flooded area that would have been dry and dusty the previous week and years.

I grew up on the south coast of Victoria in a much wetter environment, on a farm where my dad had a herd of dairy cows. He didn't need to irrigate like they do in northern Victoria because it rained regularly and he had a permanent creek on the property that provided drinking water for the stock. But even so, a flood was an event that had to be recorded on camera. This is the view from my mother's garden, looking towards the track we used to get to the school bus each day. I remember her making sure we had our gumboots at the bus shelter (that dad had built for us) if it flooded while we were at school, or we would wear them to wade through the water and then change into our school shoes at the bus shelter. In our area the water soon drained away because it was undulating country.

This anecdote is more of a rain event rather than a flood. In the summer of 1969 my two friends and I travelled to Sydney to attend to NCYC, National Christian Youth Convention. I took my car and we camped at Nowra on the New South Wales coast on the way. The first photo below shows our camp set up for the night. The second photo shows the same tent after it rained two inches (about 50 mm) during the night! Everything was wet, wet, wet. Just as well we were in accommodation for NCYC because it took all week to dry everything out.

And finally, one that is interesting but doesn't belong to me. I have been scanning old photos for the Genealogical Society of Victoria's Flickr page and this was one I processed this week. It's a Fiat car bogged to the axles, somewhere in Victoria, in the 1920s. I wonder how he got the car out? I'm guessing he walked to the nearest farm and asked the farmer to bring his horses down to tow him out. But I'm glad he, too, thought to take a photo.

You can see what others have made of the theme photo over on the Sepia Saturday webpage.
Posted by Boobook at 3:02 PM