Anzac Day: We remember them

On Anzac Day we remember and pay tribute to Australians and New Zealanders who served in World War 1. This day acknowledges the first engagement, the first landing at Gallipoli in April 1915, and increasing numbers of people make the pilgrimage to Gallipoli each year and on this day in particular.

Today I select one of these to highlight. Thomas Henry Smith was my grandfather's brother. They grew up with their siblings on a wheat farm at Lawler, east of Minyip in the Wimmera district of Victoria. Tom was the oldest child.

On the 7 March 1916, when he was 23 years old, Tom enlisted in the AIF (Australian Imperial Force) as a private in the army. In the Australian Archives there is a 26-page file that describes his service in France and I've gleaned most of the following information from that. This is the first page. 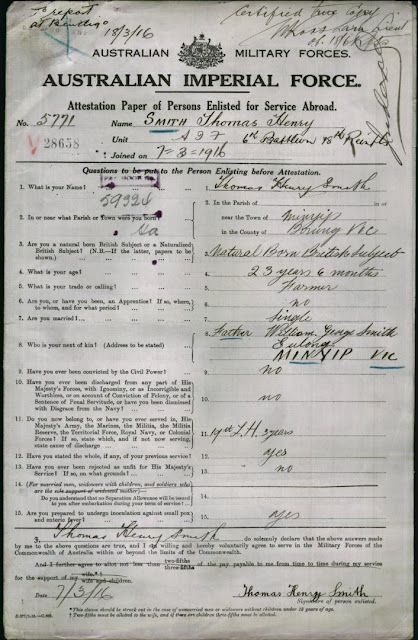 For the previous three years he had been a volunteer in the 19th Light Horse, a militia reserve. It was during his brief training period in Victoria after he enlisted in the AIF that this photo was taken. 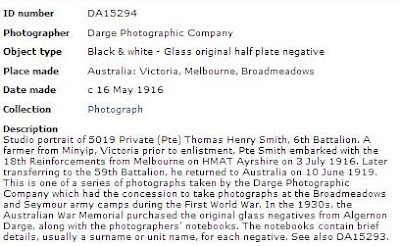 Tom embarked on the ship 'HMAT Ayrshire' and arrived in England two months later, September 1916. He was sent to training camp at Perham Down near Salisbury in Wiltshire before being transferred to France in October. 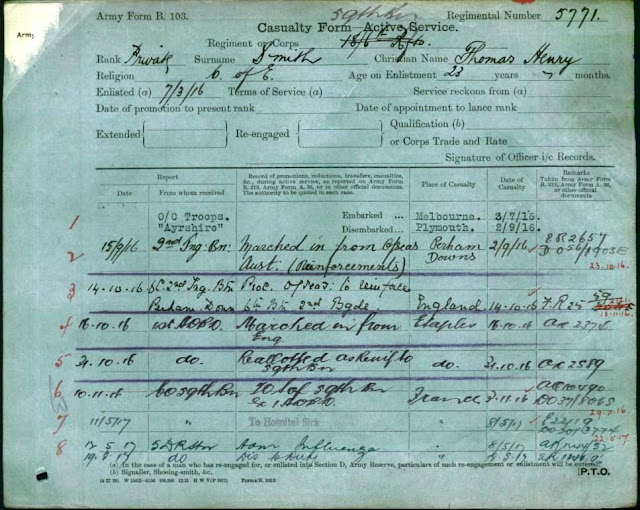 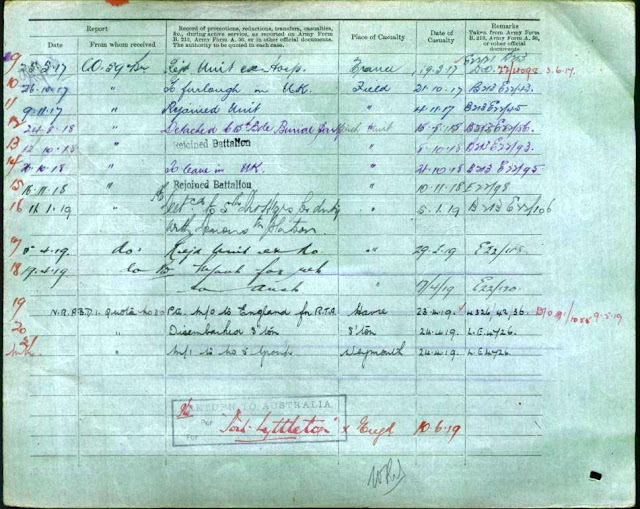 So we know that in May 1917 Tom was admitted to hospital suffering from influenza, that on 21 Oct 1917 he was sent back to England for a month's furlough, that he was detached from his regiment for 6 weeks in August 1918 to work in a burial party and that he was again sent on a month's furlough in England in October 1918. He returned to Australia on the 'Lyttleton' in June 1919 having served on the dreadful battlefields in France for over two years. I don't know what his experiences were but those six weeks working in a burial party must have been dreadful. Imagine collecting the bodies, that would have been in varying states of damage and decay, trying to identify each soldier by locating his name tag, carrying them out through the battlefields on stretchers and digging the graves to bury them.

As far as I can tell my great-uncle Tom managed to return home physically unscathed. And seemingly mentally unscathed as well. He married Evelyn Wyllie in 1923, raised a family, farmed for a living at Laen and greatly enjoyed visiting family in Victoria and Queensland. He was a most jovial man and I was very fond of him. He died in 1969.

Lest we forget.
Posted by Boobook at 3:24 PM