My mother-in-law had fond memories of her Grandma.

Margaret Alford was born Margaret Stone in Bagdad, Tasmania in 1860 where her family were farmers. Her parents were Joseph Stone and Margaret Foster and she had two older brothers when, in March 1863, the family moved across the Bass Strait to Victoria, selecting land at Woodstock West and building a house they called 'Alva'.

Margaret's older brother, Joseph, died when Margaret was five years old. Five more siblings were born in Victoria but one, a sister Joanna, died at three when Margaret was nine years old. I don't know the cause of death for either child but their deaths must have had an impact on young Margaret.

In May 1882 Margaret married a local farmer, Thomas Alford, at the Bible Christian Church at Woodstock West. The bride walked to the church from her home.

In 1903 the family moved to Mologa, near Pyramid Hill in central Victoria, and built a house on their farm they called 'Myall Marsh'.

Margaret's father had died in 1890 at the age of 63. He'd never fully recovered after a horse kicked him three years earlier.

In the next few years there was a series of accidents involving Margaret's siblings and children:

Margaret's brother James had married Thomas Alford's sister, Eliza but she died in 1892 of Tuberculosis.

In 1901 Margaret's brother. George Henry Stone, also had an accident. He was 25 years old. Unfortunately it seems to have had a lasting effect because he committed suicide in 1907.


SAD SUICIDE AT NEWBRIDGEWoodstock West, 21st JanuaryQuite a gloom was cast over the district on Saturday when it became known that Mr. George Stone, well-known respected farmer, had been found early in the morning hanging from a rafter in a stable at his farm near Newbridge. The body was quite cold, and it is presumed death must have taken place the previous evening. The deceased, who was only 30 years of age, was connected with the Methodist Church mid Sunday School, and was also a prominent member of the Rechabite Order. Some few years ago the unfortunate young man met with a serious accident, having been found in an unconscious condition, the result of a fall from a horse, the effects of which were at the time severely felt. Deceased was engaged carting wheat to the Shelbourne railway station, and had delivered a load on Friday. After partaking of lunch with his sister he proceeded to prepare for Saturday's work. An inquiry was conducted on Saturday evening before Mr. W Greene, P.M. and a verdict of suicide whilst temporarily insane was recorded. The funeral took place Sunday afternoon at Newbridge Cemetery and was largely attended. The service at the grave was conducted by the. Rev. A. Uglow. Much sympathy was expressed for the relatives and friends. Bendigo Advertiser 22 January 1907

In 1903 Margaret's sister had her leg amputated. The family story is that it was done on the kitchen table and that Isabella sufferered from epilepsy after the operation. Margaret's daughter, Ella aged 18, went down to Woodstock to care for her. Isabella died in 1916 at the age of 52.


In 1904 Margaret's mother, also called Margaret, died at the age of 71. Both of her parents appear to have been highly respected. 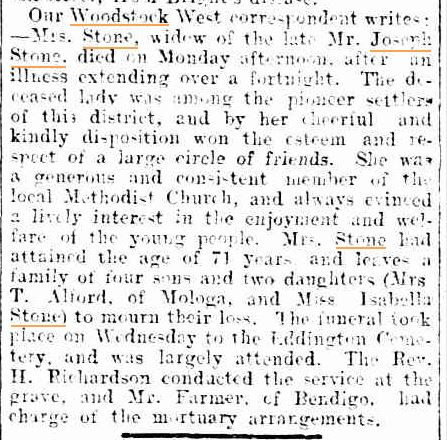 In January 1906 Margaret's son Arthur died when he was 18. He drowned in a dam near their farm at Mologa after presumably suffering cramp. His younger brother could not save him.

In  WW1 Margaret and Thomas' son, Tom Alford, enlisted in the army in March 1916 and served in France. He returned to Australia in 1919.

In 1922 Margaret's son Charles (Dick) Alford died aged 20. He was thrown from a gig. His leg was badly broken but there were other internal problems and he died five weeks later.

In 1919 Thomas and Margaret moved off the farm, leaving it in the charge of their sons Tom and Ralph, and moved to Honeysuckle St, Eaglehawk.


In this photo Margaret is wandering alone through a garden and even though she was much loved by her family it is tempting to think that she was remembering those in her family who had died.

Margaret herself died in 1932 at the age of 71. Her husband had contracted influenza and decided to go to their daughter Ella Pickles' home to recuperate.  It was while nursing Thomas that Margaret took ill and she never recovered. Thomas died eight years later. Both are buried at Pyramid Hill.

This post highlights the amazing resources at Trove at the National Library of Australia.
Posted by Boobook at 4:21 PM