Grandfather Roy Phelan served with the AIF in France in WW1 and I've blogged about his military life several times. But this time I'm writing about a real photo postcard that he had in his album. It's a photo of another Australian soldier and on the reverse side are the words (in two different handwriting styles). I suspect that Roy's wife, Annie, wrote the second sentence:
Harold McGregor killed France 18 Sept 1918. Same day Roy was knocked.
There is also a note in the stamp square that says 'Give this one to Gib'. Gib was Roy's brother but may refer to a different Gib. 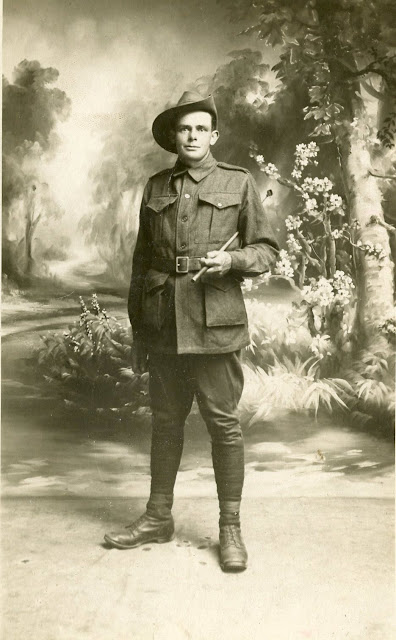 I knew we didn't have a relative called Harold McGregor so I went searching to see what the connection was. It turns out that Harold, born in Gisborne, was from Mitiamo and Pine Grove in Victoria, the same area as Roy and his future wife Annie (Sims). And, also, Harold served in the same battalion as Roy. The reverse of the postcard gave me the date that Harold was killed in action and the fact that it was the same day that Roy was badly injured in battle ('knocked').

Harold McGregor, a farmer from Pine Grove, was 27 years old when he enlisted in the AIF. It was October 1917. Harold's father had died in 1912 and his mother, Margaret, also lived at Pine Grove. And Harold had some siblings, three brothers and two sisters, and his oldest brother had been killed in action at Gallipoli in 1915.

Harold enlisted and started his training at Broadmeadows near Melbourne in preparation for a transfer overseas. He embarked on the 'Nestor', the same ship as Roy, but I discovered in a newspaper item that he didn't get any home leave before he departed - he volunteered at short notice to board ship in place of a married man with children who hadn't had a chance to visit his family before embarkation. As the newspaper headline states it was a 'brave, soldierly act'.

Roy Phelan wrote very regularly to his future wife, Annie Sims, and in his letter written from the pier in Melbourne he mentioned Harold McGregor.

28/2/18
My Darling Annie,
We are getting a move on at last. We left Broady at 7 this morning and arrived here about 9. Now we are waiting to embark and expect to leave about 11. You love will be envying me the lovely trip that we are going to have. We don't know where we are off to but Annie dear you can guess as soon as we land you love will be one of the first to know of it. Altogether there are at least I500 of us and we had special trains. Very important aren't we….
We have drawn all our clothing and today finished up by getting water‑proof sheets. I am not sorry either for the more stuff we get the more we have to carry. Yesterday everybody had to put one bag out and it has been sent off already.


Harold Mc. was on one of the wagons so was speaking to him for a few minutes. He said he would be going very shortly now. If he does it will be very hard on his mother for she must be getting very frail now. This afternoon we were given leave from 2 o'clock and you should have seen the rush. Everything was overloaded and it was a wonder some reached their destination.

And Harold is also mentioned in another letter written en route. The comment confirms the newspaper account of his hasty embarkation.


Nearly every day we have to get into life belts. Having to get into them makes one think that at some time or other we are going to get wet. I am not looking forward to it though. While promenading the deck the other night I ran into Harold McGregor. I did not know he was coming and don't think Harold did either. He has since told me he was only warned the night before.  He could have refused to come as they must give a man at least two clear days warning. All the Mitty boys are aboard. Lew, Eddie, Harold and myself. We generally manage to get together of a night for a yarn.

Both Roy and Harold were in the Fourth Division of the AIF, in the 46th Battalion. After landing in England they were both sent to Codford to do more training but were living in different camps. They met up occasionally over the next month or so prior to being transferred to France, as Roy details in three more letters to Annie.

You can't guess who came into this camp Friday, Love. I was busy doing my best to darn a hole in my sock when in walked Harold McGregor. He had just come over from Park House camp. All the men in the A.S.C. who came over on the Nestor have been transferred into the infantry and what's more into the 46th battalion.  Harold says he is going to get back into the A.S.C. He may but am afraid he will have a hard job unless the doctor says he is not fit for the infantry. It seems funny doesn’t it Dearest comparing Harold with me and then classing me as the fitter of the two.

Codford...
Today I went along and saw Harold and we had a long chat about good old Mitty, and then decided to go over and see Lew. We got there alright but found him away in the hospital with the measles and we could not get any word of him. I don't know how we have escaped as now there are only 30 of us out of isolation. Harold has been up before the doctor and has been classed fit so am afraid he will have a job to get out of the infantry.

Codford
England
Sat 6‑7‑18
My Own Dearest Annie,
At last the time for is drawing near and Love I am looking forward to going. You may think it strange Darling for going to the front may seem terrible to you but it is really only another phase in a soldier’s life and to my way of thinking the quickest way to home again. The only thing I am sorry for is that Harold and Lew are not coming over with me and it will be just a chance if we meet again for some time…


Harold and l went over to see Lew tonight and then we all went down the village and had tea and a jolly good tea it was. It will be the last we will have together for some time and Darling the next time we do, I trust it will be at Mitiamo. We next went to the pictures, the first time I have been since we came here, and they were good. I now wish I had gone more often.  We went in to them a little after 7 and intended staying only an hour but it was 9 o'clock before we came out so we then had supper and got back home again. I have everything ready now Love although I am rather late so Sweetheart I am writing by candle light for I know you will not mind if I make a good many mistakes, blotches etc. Some of the boys are merry and are wandering about kicking up a row. One can hardly blame them though for perhaps it will be the last time we will meet under the same circumstances. Some are singing others dancing, and still others doing their best to wake all the sleepers up. It reminds me of the last night at Broadmeadows…

The next letter that mentions Harold was written from France so Roy was aware that it would be censored. Locations and strategic matters were not allowed to be mentioned but I know from other sources that the 46th Battalion was preparing to join with other Australian Battalions flanked by British and American forces in a battle now known at the Hindenberg Line. The men in the 46th did most of their fighting near a village called Bellenglise.

France
30/8/18
My Dearest Annie,
…
I only had a little over the week at the con camp and then went back to the base. The morning after reaching it one of the first ones I saw was Harold, he had landed in with a number of others sometime during the night.On the Sunday they put a number of us through gas again. I think they must like seeing us with our masks on for lately we have been going through it every few weeks. We left the base Monday after‑noon and after a days train riding and a few miles marching we got back to the battalion again. I came back to my platoon while Harold although in a different platoon he is in my company so we will always be fairly close to each other.This time we are billetted in a village and I am on the top floor of a three storey house.

On the first day of the allied push, on the 18 September 1918,  Roy was badly injured by shrapnel near Bellenglise and ended up in hospital in England. He didn't know it at the time but his friend Harold was killed the same day by a machine gun. From hospital he mentioned that he hadn't heard from Harold.

1st London Gen.
Camberwell
London
My Darling Annie,
…
It is some time now since I have heard from Harold & Lew and I have been wondering how they are getting on….

It was not until December that Roy heard, via Australia, that Harold had been killed.

Kilburn
London
15/12/18
My Dearest Annie,
…
Poor old Harold. Your letter Love was the first word I had of his being killed. No wonder I had never had any answers to my letters. It was only a couple of days before that we had been laughing and joking together. He was a good lad, one of the best. I never saw him that day Annie for he was in another platoon which was on our right and I suppose Harold would get a good way further on than I did. It would be a great blow to his Mother…

One of the newspaper notices mentions that Harold's brother, Gilbert, was also an enlisted soldier but I haven't found proof of that.

Several of Harold's soldier mates made statements to the Red Cross that they had seen him killed instantly by machine gun fire but several years after the war his mother was still writing to the army to see if they had any of his belongings because she hadn't received anything at all.

There is no headstone for Harold McGregor so it appears his body was never recovered. His name is on the wall of the memorial at Villers-Brettoneux, France. He and his brother are also mentioned on the war memorial at Mitiamo.

Nearly 100 years later, in November 1914, the Gisborne Gazette published an article about the two McGregor brothers who had been killed in action and it mentions a drinking water fountain that was erected in Gisborne in 1935 by their brother John in their memory. The McGregor Memorial Fountain still exists.
Posted by Boobook at 9:33 PM