Trove Tuesday: In which Gabriel wins Shire of Korong contracts

I think I'm in love... with Trove. Every time I check it comes up trumps. There's always something new and interesting in one of Australia's newspapers of long ago.

I've recently been to Wedderburn where my grandmother grew up, saw the house they lived in, saw the school she went to, the church the family attended. Myrtle's father, Gabriel Duckett, was a gold miner. I had previously thought that was his major occupation but now I'm not so sure because of several newspaper reports reporting that Gabriel was successful in applying to his local council for contracts.

In 1880 he won two contracts: to grub about 3 miles in the parish of Yeungroon for 10 pounds 5 shillings and to grub one and a half miles at Spring Hill for 5 pounds. This refers to roads and involves clearing tree stumps and timber.

In 1884 Gabriel wins a tender to light the lamps at Wedderburn for 2 shillings and 2 pence per lamp per week. They would have been the street lights fueled by kerosene. I wonder how many lamps there were.
Three years later he is not being paid as much to do the same job but this time the materials aren't mentioned so maybe the council supplied those.

In 1890 he was paid 17 pounds 17 shillings to paint the shire weighbridges. Presumably that was gross - he would have had to supply the paint himself.

And it wasn't only the shire that Gabriel sought contracts with. In 1888 he (with his father-in-law Zachary Perryman) was successful in gaining a contact with the Railway Department to supply 200 tons of firewood (cut into 2 ft lengths) to the Korong Vale railway station. 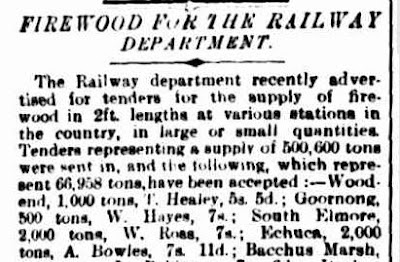 ...
All of this physical work is making me tired - mining for gold, cutting timber, lighting lamps, grubbing stumps, painting weighbridges - as well as maintenance jobs around the house. Gabriel must have been very busy. But I also know for sure that Sunday was a rest day because the Duckett family were all members of the Church of Christ in Wedderburn. 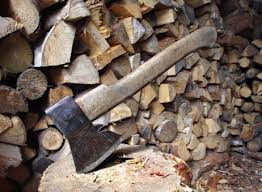